Wisconsin’s Comprehensive Planning Legislation ensured that by 2010, every city, village, county and most towns in the state would be guided by a comprehensive plan as defined by state statute.

Why the Smart Growth Comprehensive Planning Law was needed?

The new law was passed to: 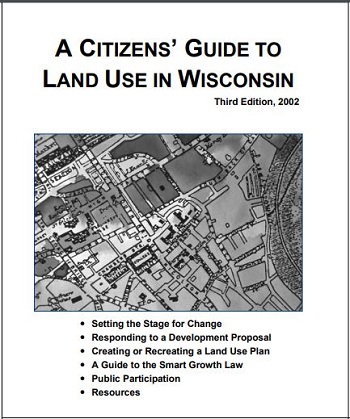 Read the Citizen’s Guide to Land Use in Wisconsin

The History of Land Use in Wisconsin

Less than 20 years ago, Wisconsin had no statewide plan for land use and we were all paying the price.

From 1950 to 1990:
-We lost nearly 4 million acres of farmland (that’s larger than the entire state of Connecticut).
-We added over 10,000 miles of roads and more than doubled the miles we drive each year (almost 60 billion miles annually in Wisconsin).
-Our land area in southeastern Wisconsin expanded 17 times faster than the rate of population growth.

Losses around the state:
-In northern Wisconsin, undeveloped lakes became endangered -since the 1960s, about 60% of previously undeveloped lakes 10 acres and larger have been developed with one or more dwellings.
-Development pressure on the larger lakes increased by 800% over the same time period. According to a study conducted by the Wisconsin Department of Natural Resources, unless we change our development patterns, all currently undeveloped lakes over ten acres will be developed by 2025.
-In 1970, most people had never heard of forest fragmentation. Today it is one of the biggest threats to our northern boreal ecosystem. Forest fragmentation is disrupting the natural ecology of wooded areas throughout our northern forests.

By 1990, the land of Leopold, Nelson and Muir was slowly losing its identity, seemingly destined to become a sprawling suburb sandwiched between Chicago and Minneapolis.

The Creation of 1000 Friends 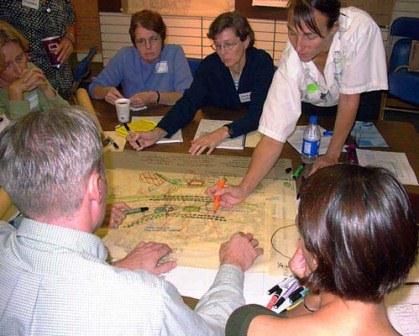 In spite of all of these threats to our land, the state had no plans for managing growth. Nor did it have any organization trying to promote a rational strategy to address growth.

Things started to change in 1996. A group of activists, frustrated by inaction at the state level, were determined to direct growth in ways that benefited the state and individual communities.

This group eventually created an organization, called it 1000 Friends of Wisconsin and went to work.

And in three short years, that small group had made a huge difference.

By working collaboratively with municipalities, counties, builders and realtors, 1000 Friends was able to spearhead the successful effort to pass Wisconsin’s Comprehensive Planning Law in 1999.

From the very start, the program had strong bi-partisan support. Starting with Republican Governor Tommy Thompson who worked with legislators to create the Comprehensive Planning law, Democratic Governor Jim Doyle rescued the program from a repeal of the law contained in the 2005-07 state budget, which was orchestrated by a small group of legislators who misrepresented how the law worked.

Details of The Law

Gone were the days of “developer’s choice.” Decisions about development would take place openly and with public participation.  Land use decisions would be made in a larger context.

Until 2010, the plans were advisory. Now, all land use decisions in communities that are required to have plans must be consistent with those plans.

That means that the vision that was created through the comprehensive planning process has a meaning that no other plans have had. Instead of gathering dust on a shelf, comprehensive plans are dynamic documents that will guide land use decisions in a community. The plan represents a vision and the actions of a community will have to make that image a reality.

All land use decisions carry a certain amount of controversy.  We have had to fight repeal efforts almost every session of the legislature. But, for the first time in the state’s history, comprehensive planning with public participation is the law. It may be the state’s best chance to hold on to the legacy of Gaylord Nelson, John Muir and Aldo Leopold.

Land Use Planning and Climate Change

When discussing climate change mitigation strategies, the focus tends to be on energy – i.e. switching to renewables.  An important area that is often overlooked is urban and regional land use planning. How communities are designed and how people move around them has both short and long-term consequences for mitigating and adapting to climate change.

Through sound land use and transportation planning, carbon emissions can be decreased and carbon neutral goals achieved, while also becoming more resilient to the impacts of climate change.

By planning for a transportation system that prioritizes accessible, clean, and affordable multi-modal transportation options, including transit, RTAs and BRT; as well as useful biking and walking infrastructure, communities will reduce driving and decrease GHG emissions. Communities must also plan for electric vehicle charging stations to accommodate the use of EVs.  If a community focuses solely on gas powered vehicles and moving those vehicles around faster and further, it will only increase carbon emissions from a sector that is already the largest and fastest growing source of carbon emissions in the U.S.

People are often forced to make choices that increase carbon emissions. It’s too expensive for many people to live near their workplaces so they buy or rent homes in far-flung suburbs and make the long commute. Within communities, there aren’t enough good options for getting around without a car. Homes are often far from grocery stores and schools. There aren’t enough parks within walking distance. The design of our cities can make it challenging, time consuming or downright dangerous to walk, bike or take public transit.

Integrating climate change adaptation priorities into land use plans has to be a priority to deal with the issues communities are already facing and will face in the future.

Best practices for water resource management have to prioritize green infrastructure to manage stormwater and flooding.  Using these natural processes to capture, filter and infiltrate storm water on site not only manages stormwater and decreases pollution, but adds to carbon capturing plants and trees.

Communities will not meet greenhouse gas reduction targets unless there is a dramatic change in the way communities and transportation systems are planned and built. The collective and collaborative efforts of everyone are essential to building community resilience to the impacts of climate change.

In preparing for changes like this, it is useful to remember our land use and transportation planning history – it is only in the last 50 years that we completely redesigned our cities, towns and villages to be built around the automobile. It is not a complete stretch of the imagination to envision a future in which destinations are close to each other and can be accessed through a variety of clean transportation options.