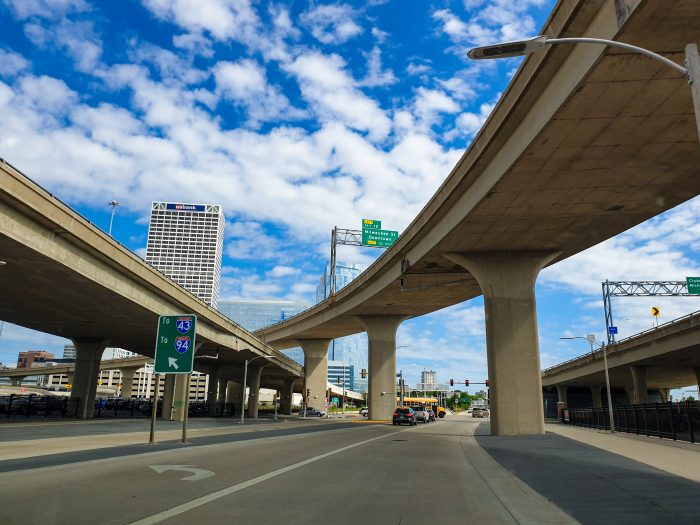 Underneath I-94.
Photo by Miguel Ángel Sanz on Unsplash

As the summer starts to come to a close, 1000 Friends felt it was important to revisit the final State budget which passed in early July. This budget will impact everyone in the state for the next two years. Unfortunately, this budget will continue our unsustainable transportation policies that have left local roads and transit behind, while continuing to expand highways.

Both Madison and Milwaukee experienced a one-time 50% cut to transit. While this funding can theoretically be filled with federal COVID-19 relief funds, that is not guaranteed. If these cuts are unable to be filled, it will have a disastrous long-term effect on Wisconsin’s two largest transit systems. At the same time, the State committed to I-94’s expansion, a $1.1B fiscal, social, and environmental mistake.

There were some items to cheer about, including the extension of the Knowles-Nelson Stewardship Program. However the program remains far below its peak funding and was extended for a shorter period of time than hoped. We will be back defending the program in four years rather than ten. In the end, this budget fails to meet the Governor’s goal of reducing emissions and preserves a transportation status quo that will hurt every non-drivers in Wisconsin. Learn more about the proposals we were following and their final resting place below:

Final Budget: Extend the Warren Knowles-Gaylord Nelson Stewardship Program until fiscal year 2023-25 at $32 million per year. At its peak, the stewardship program was funded at $86 million annually.

Final Budget: No increase to the Urban Forestry grant program and no new tree planting grants.

Governor’s Budget: Provide $75 million for local multimodal transportation projects and $15 million in bonding for a Local Roads to combat destruction from flooding events and increase General Transportation Aids for both counties and municipalities.

Final Budget: No multimodal transportation grant, a $100 million, onetime increase to local roads and increase for General Transportation Aids for both counties and municipalities.

Governor Proposed:Provide $40 million in bonding to start the I-94 East-West expansion project in Milwaukee County.

Final Budget: Provide $40 million in bonding to start the I-94 East-West expansion project in Milwaukee County.

Final Budget: No funding for the Transportation Alternatives Program (TAP).

Final Budget: Did not restore eminent domain for the construction of non-motorized paths.

Governor Proposed: Increase transit aids by $3.5 million annually, along with increases for paratransit and specialized transit.

Final Budget: No increase in transit aids and a one-time 50% reduction in transit aids to Madison and Milwaukee. Small increases for paratransit and specialized transit.

Governor’s Budget: Allow an RTA-like system to fund transit routes that cross municipal boundaries if a referendum approving the agreement has been passed.

Final Budget: No increase in the transit capital improvement program.