1000 Friends of Wisconsin, along with our partners Sierra Club and others across the state released a first-of-its kind report called “Arrive Together: Transportation Access and Equity in Wisconsin”. This report provides a profile of nine cities in Wisconsin that have public transit systems, the challenges that are faced by users of these systems and offers solutions on how we can get better. 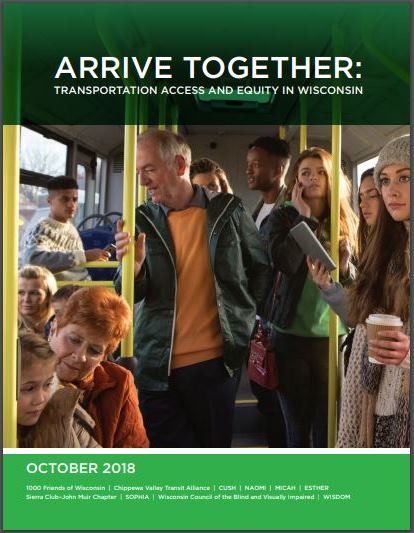 Here are the key findings from the report:

The solution, really, is pretty simple: We have to get our priorities straight. Stop expanding highways that cost billions and fail to address congestion or connect people to the places they want to go. Instead, focus on local infrastructure – fix the roads we have, and invest in public transportation, walking, and biking.

Lots of people already rely on public transportation today, and more will in the future. The population of seniors is growing rapidly, especially in this region. And young people want to live in places where they have options and can get around without a car.

If we want to create communities where people want to live, and where everyone has access to work, to school, to the doctor’s office and the places that matter, we have to invest in public transportation.