Madison – A new analysis by 1000 Friends of Wisconsin finds that Wisconsin Department of Transportation (WISDOT) traffic projections used to justify highway expansions are nowhere near materializing.  Simply updating traffic forecasts to re-evaluate projects could save Wisconsin taxpayers over a billion dollars according to the statewide land use organization.

View all of the projections

“State leaders are planning for a transportation future that isn’t materializing, while they let critical local roads and transit systems crumble,” said Steve Hiniker, Executive Director. “While these massive and costly highway expansion projects are questionable at best, there’s no question that local roads and transit systems need repair and maintenance immediately.  It’s time for state leaders to fix it first, and stop wasting taxpayer transportation dollars on costly highway expansion projects until we can better assess whether they are really needed.”

The study analyzes traffic projections that led to the authorization of 11 highway expansion projects and compares them to recent traffic counts in the current highway corridors.  The analysis finds that recent traffic counts on all of the 11 projects are unlikely to come close to the projections offered by WISDOT. Traffic projections are just one of several factors that are used to determine the need for highway expansion but they are crucial in getting federal matching funds.

“For example, WISDOT is projecting a 23% increase in traffic on I-94 near the Brewer’s Stadium by 2040.  However, actual traffic counts show that traffic has actually decreased by 8% along that stretch of highway.  Present trends show that the DOT projections will never be achieved,” said Hiniker.

The total cost of the 14 projects where traffic counts diverge from WISDOT projections is more than $3 billion.  Though there may be other improvements still needed for many of the projects, costly real estate acquisition and the expense of more lane miles of concrete could be saved by downsizing the projects.

The Wisconsin Public Interest Research Group (WisPIRG) joined 1000 Friends of Wisconsin in raising concerns over WISDOT projections.  “We applaud 1,000 Friends of Wisconsin for conducting this important analysis, which confirms earlier research about WISDOT’s expensive failure to acknowledge that travel behavior has been changing in Wisconsin,” said Bruce Speight, WISPIRG Director.

“Wisconsin taxpayers deserve more accountability,” added Hiniker.  “WISDOT and some state leaders are asking for more money for transportation.  Before taxpayers fork out more, we should make sure we are fixing local infrastructure and not wasting billions on highway expansions that are unnecessary.  Let’s start by getting our transportation priorities straight before we waste taxpayer money on highway expansion projects we don’t need,” concluded Hiniker.

View the slide show and read the study. 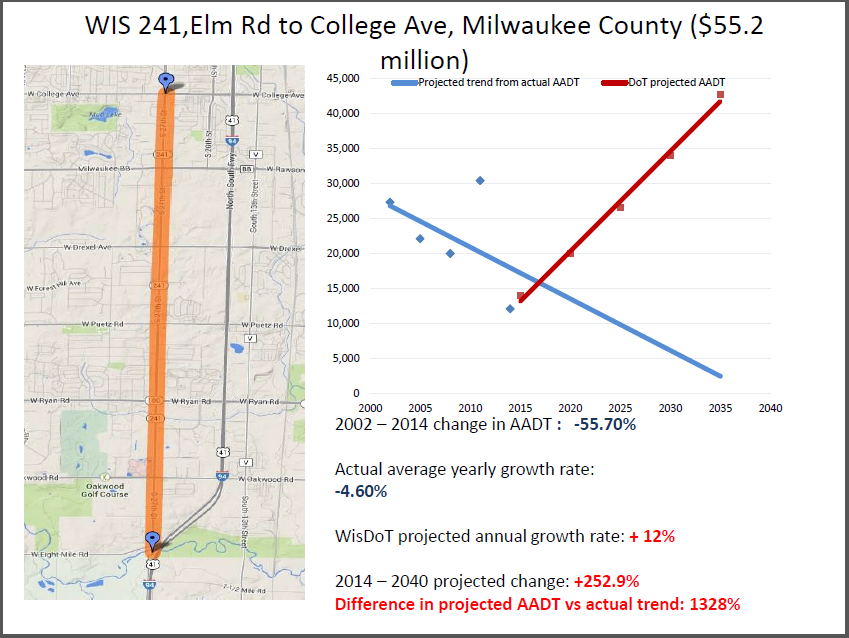