Disproportionate Impacts on Minorities and Failure to Coordinate with Local Agencies

WisDOT does not adequately seek to understand the impacts of the projects on minority and marginalized communities and misrepresents data in claiming negligible impacts.

Minority neighborhoods are often the venue for the construction and expansion of urban freeways. This was a result of explicitly racist and discriminatory land use practices that resulted in the widespread segregation and marginalization of people of color in most of America’s cities. This particular corridor is no exception, with more than half of all residents in the area being people of color [14]. 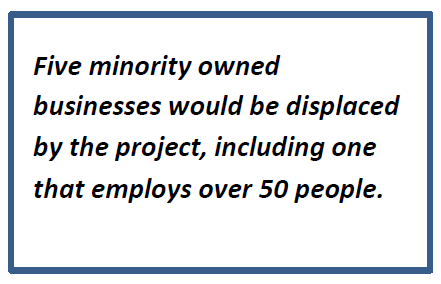 WisDOT estimates that five minority owned businesses would be displaced by the project, including one that employs over 50 people. Troublingly, the language used in the DEIS on the impacts of the project on this population is cavalier at best.

For example, the DEIS states “A minority‐owned business, INTEC, in the east segment that would be displaced by the Off‐alignment alternative has about 50 employees, most of whom are Hispanic.

Most of the employees live very close to the business. If the business were displaced, it would make it more difficult for these employees to reach their jobs, unless the business relocates to a nearby site” and goes on to say “The businesses do not serve a need that the population cannot obtain elsewhere in the area. Non‐minority‐owned businesses in the corridor also do not provide services that cannot be obtained elsewhere near the corridor.”

This language suggests that even though significant impacts have been identified on the minority and low-income population in the neighborhood, they have been casually dismissed and not taken into consideration during alternative development. 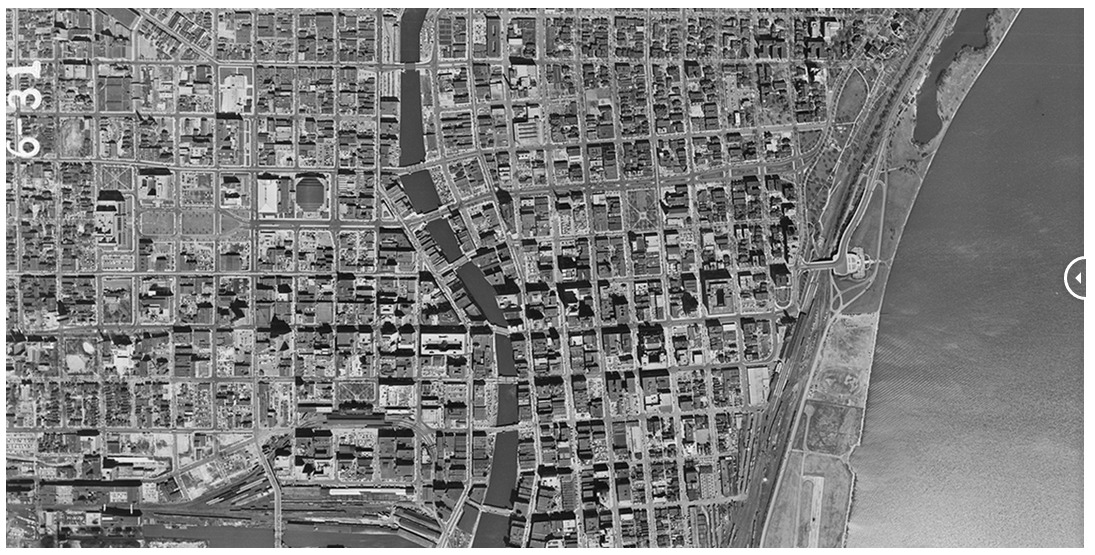 Milwaukee, 1955. Milwaukee sees significant demolition throughout the downtown (see below) 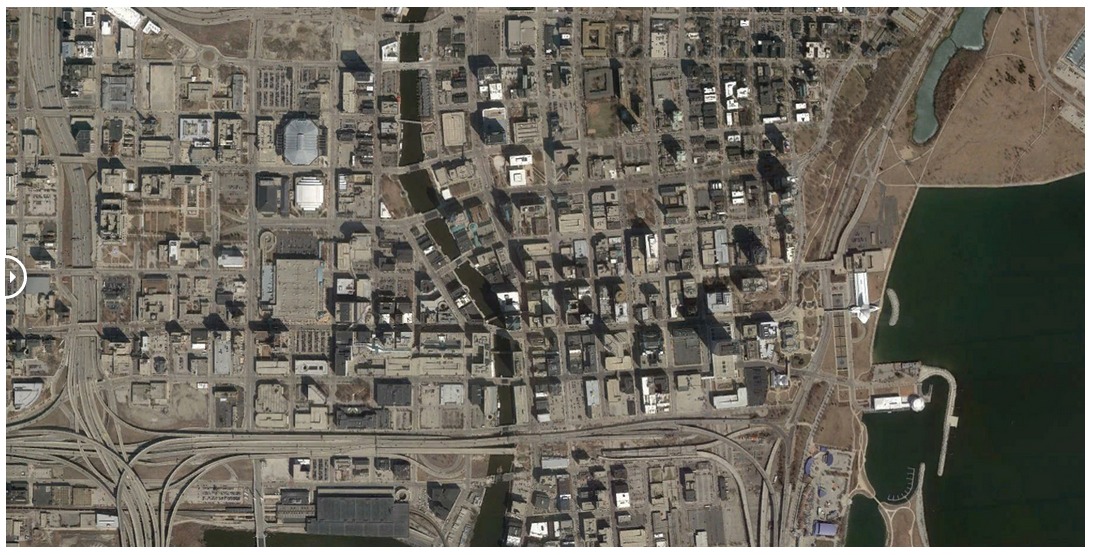 This is in direct contradiction to WisDOT’s own goals for mobility and choice that state that the agency will provide (Page 8-7, Connections 2030, WisDOT):

The DEIS also states that “local residents who do not own a vehicle and do not routinely use the bus system would not necessarily benefit from an improved I‐94. However, there would be no direct adverse impact on the segment of population that does not own a vehicle.”

Again, this statement does not seem to be made based on any analysis of transit, pedestrian and biking impacts of the project. It is instead, likely that an increase in highway width will further impede connections to the local street network for bicycle and pedestrian users in addition to disruptions from construction activities.

In addition, WisDOT seeks to absolve itself of any responsibility to coordinate implementing SEWRPC’s transit plan, as well as their own commitment to increase the level of transit services for populations that may not have easy access to cars.

Page 2-31 of the DEIS states “Implementing the transit element of the regional plan is outside WisDOT’s jurisdiction, except for park‐and‐ride lots and HOV lanes on freeway entrance ramps.” They also say “WisDOT’s role in transit, as defined by state statute, is to fund transit‐operating cost at the level designated by the state budget. WisDOT cannot unilaterally implement the regional transit strategy.”

Page 8-7 of the plan states the following: “ WisDOT will work with partners to improve transit service, eliminate efficiencies and improve transit planning. WisDOT will work to expand its role in facilitating communication and coordination among the many transit providers and funding agencies across the state. The department will also seek to streamline and consolidate complex and disjointed funding and operating structures. In addition to more efficient operations, improved coordination will support more transit options for the public, improve access to jobs, and expand the area accessible by transit (including areas on the urban fringe)”.

To achieve this, WisDOT will:

WisDOT has not engaged the City of Milwaukee, Milwaukee transit providers or local communities in creating a coordinated transit plan that would prevent the need for highway expansion.

The statements made in the DEIS indicate a complete disregard of the agency’s own long range transportation plan – and run contrary to their goals of enhancing livability through increased investment in multimodality.