For several months, 1000 Friends and our partners have been working on a report to discuss the future of I-94 and the potential for more sustainable and just alternatives to expansion. Check out the project website for ways to support the project and to learn more: https://fixatsix.org/ 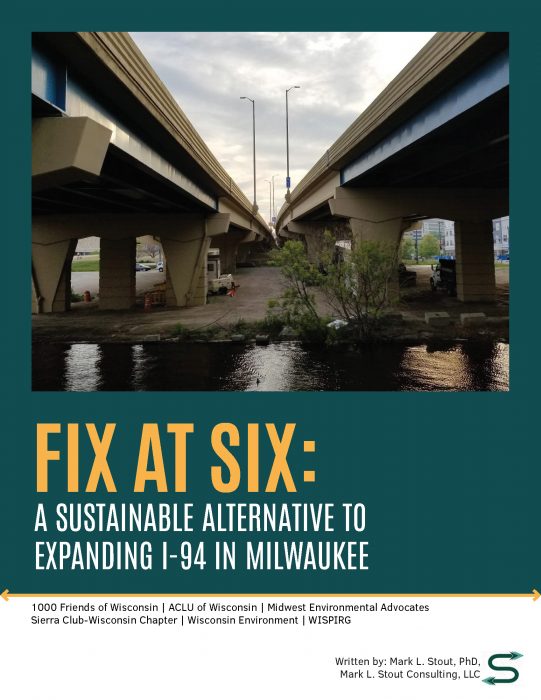 As you may know, WisDOT is proposing a $1.1 billion dollar highway expansion for a 3.5 mile stretch between the Marquette Interchange and Zoo Interchange, passing through a number of Milwaukee neighborhoods. This is a generational investment in Milwaukee’s transportation system and if we are going to spend a billion dollars, we should do it right! The project should be context-sensitive to the communities that are adjacent to the corridor.

That is why our coalition commissioned expert transportation planner and 25-year NJDOT veteran Mark Stout to review the feasibility of options beyond expansion. Options that will promote better access for the surrounding neighborhoods, reduce carbon emissions, and improve access to jobs, healthcare, and basic goods for everyone, not just suburban commuters. The result of this effort is the “Fix at Six” report which promotes the Transit/Rehab alternative for I-94.

Expansion is not the Right Choice!

The Fix at Six report also highlights the reasons why expansion is not the right choice. For starters, expansion will increase transportation emissions at a time when need to be doing the opposite. It will harm wetlands and green space, increasing impervious surfaces despite Milwaukee experiencing many of its wettest years on record over the last few years. Expansion will also continue a status quo from WisDOT that favors wealthy suburban commuters and ignores local road repair and transit.

Despite what WisDOT is saying, expansion will not solve what few congestion issues exist. As noted in the Wisconsin Business Journal, Milwaukeeans enjoy fairly quick and easy commutes compared to those in other large American cities and have not seen substantial increases in commute times over the past decade. Even if there was serious congestion, highway expansion would be unable to solve the issue as proven by both academic research and decades of lived experience in cities across America. Simply put, if we could have built our way out of congestion, we would have do so already.

We would like to see that WisDOT legitimately evaluate the Transit/Rehab alternative as a feasible option and make sure an expansion alternative is evaluated for its impacts on climate change and racial equity. Check out the project website to read the full report and to endorse the transit/rehab alternative!

A potential map for the Transit/Rehab Alternative.