A brief but intense rain came to a halt just as Bill Sturm and I pulled up to one of the sites that the City of Oshkosh chose for a set of street tree plantings. With the leaves still wet, Bill and I got a real-time look at the rainfall capture techniques of the young redbud trees. They were doing exactly what they were paid to do, reduce runoff. 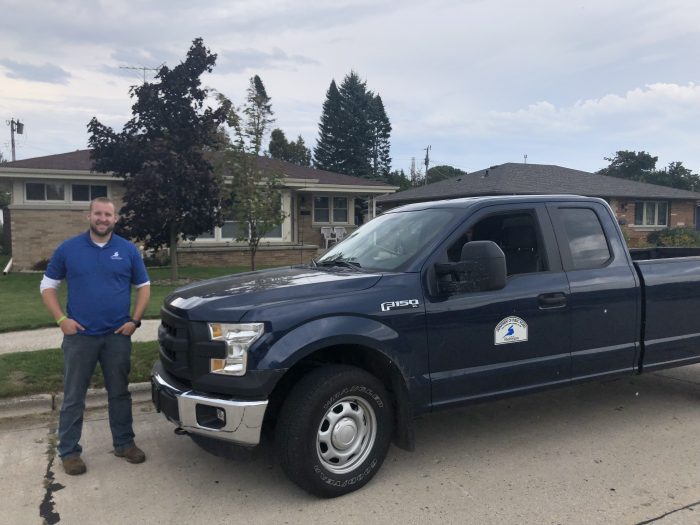 Back in mid-September I visited Bill in Oshkosh and Tim Bull in Sheboygan to check on trees that both communities planted with the help of the GLRI grant administered by 1000 Friends. I got to see the trees that I was hearing so much about, and also put up signs to recognize 1000 Friends’ GLRI grant partners. Our partners include DNR Green Tier Legacy Communities (GTLC), Sheboygan, Oshkosh, Ashland and Bayside and DNR Urban Forestry.

I arrived in Sheboygan on a Tuesday afternoon (after some time on a quiet stretch of Highway 23) just as the skies were clearing after a lunchtime rainfall. Tim Bull, Sheboygan City Forester, greeted me at the Public Works building for my tour of Sheboygan’s street trees. Tim drove us to three different groups of tree plantings. As we pulled up to the trees on Wedemeyer Street, Geele Avenue and North 31st Street, I noticed the void of tree canopy. Like many Wisconsin communities, Sheboygan was hit hard by the Emerald Ash Borer (EAB). EAB hit pockets of Sheboygan harder than others due to large clusters of ash trees in some neighborhoods. That’s why Tim decided to focus a diversity of GLRI tree species in areas that were hardest hit by EAB. 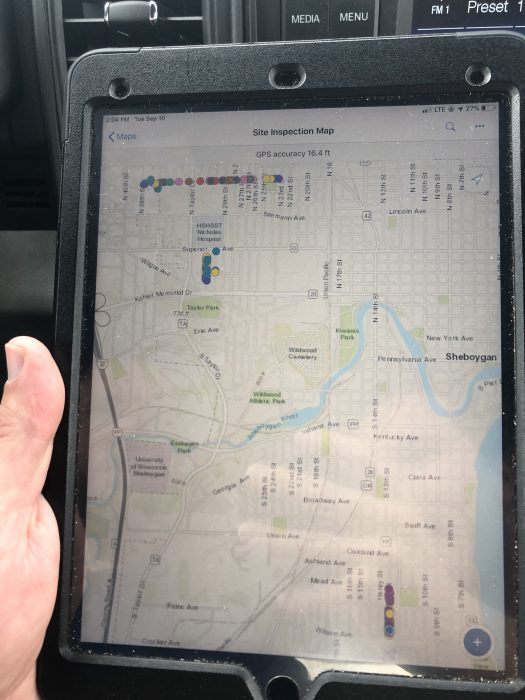 Tim navigated us using an internal GIS map.  Tim and his crew members label individual trees on the interactive map with notes on inspections, action items, etc. to help manage Sheboygan’s street trees. You can see the three clumps of tree plantings that were funded by our GLRI grant at the top of this picture.

While each of the sites for tree plantings still seem to be lacking tree canopy, that won’t last for long. Twelve different species of young trees now fill contiguous blocks that lost large tree canopies from EAB. The increased diversity of species that were planted provides more protection against future pest and disease outbreaks. And as the trees continue to grow and mature their impact on stormwater runoff reduction will only expand.

After a nice September night camping in the teepee at Mauthe Lake Recreation Area in the Northern Kettle Moraine State Forest I moseyed west to meet with Oshkosh City Forester, Bill Sturm.

Bill has been with the City of Oshkosh for about 15 years. He is Oshkosh’s City Forester and Landscape Operations Manager- and he is a household name when it comes to Oshkosh community projects. He has dedicated countless volunteer and on the job hours to greening Oshkosh and to making his efforts sustainable. A comment on one of our Facebook posts tells it all, “Bill Sturm is one of the best!” Bill took me around Oshkosh in his work truck to show me where the GLRI trees had been planted and gave me a separate tour of all the work he and his Parks & Forestry Department crew are doing.

Oshkosh is unique in that it has a public-private partnered tree endowment fund, which Bill helped start, called Taking Root. Neighborhood associations and other large scale beautification projects can request trees through the fund, but the requests often need complimentary funding to occur. Bill often has projects on the back burner that can come center stove when grant opportunities like GLRI come along.

Bill and I stopped by Emmeline Cook Elementary School where a neighborhood association had requested trees. The school on E Nevada Avenue got redbuds, a relatively short tree species that won’t interfere with power lines, but one that still reduces stormwater runoff by capturing rainfall with its broad leaves. We continued to hop in and out of Bill’s truck to visit the other plantings at Washington Elementary School and on Court Street by the Oshkosh Fire Department. 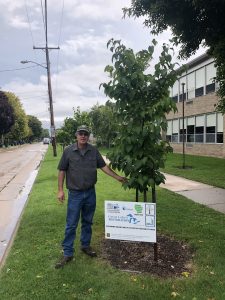 Because our GLRI project was focused on the reduction of stormwater runoff into the Great Lakes Basin, I asked both Tim and Bill whether some trees are better than others at mitigation. They both suggested that larger trees are more efficient for runoff prevention because they need more water to survive and prevent more water from reaching the surface. They also both stated, “any tree is better than no tree.”

Their identical answers prove that Wisconsin communities just need street trees. They are an important component to mitigating the negative impacts of increased rainfall events. But they provide so much more- from removing carbon and other air pollutants from the atmosphere for public and environmental health to reducing energy demands and slowing traffic. Trees are a critical tool for the health of all Wisconsin communities.