–This article was originally featured on the front page of the Atlantic’s CityLab.
-by ERIC JAFFE

A federal district court ruled against a highway expansion on the grounds of flawed traffic predictions.

After years of consistently going up, driving mileage in the United States began to plateau around 2005, and it remains shy of historical per-capita highs—a new normal casually called “peak car.” Still many official traffic forecasts remain tainted by the old belief that car use is always on the rise. The result is that highway expansion projects seem necessary to meet driving demands, and taxpayer money goes to building new lanes instead of maintaining existing ones.

Flawed traffic models aren’t going away anytime soon, but their influence suffered an overdue blow in federal court last weekend, in a case involving the$146 million expansion of State Highway 23 in Wisconsin. Judge Lynn Adelman of the Eastern District Court ruled that officials failed to justify their future driving estimates in the face of peak car trends. As a result, the Wisconsin DOT might not have properly considered alternatives that didn’t involve doubling the lanes from two to four.

If it is true that the defendants’ projection of traffic volumes is flawed, then one of the key rationales for expanding the highway to four lanes will be undermined. If accurate projections are used, it may turn out that an alternative to full-blown expansion, such as installing passing lanes in certain areas and making other targeted improvements, would satisfy enough of the project’s purpose and need to be feasible.

In practical terms, the decision halts the highway expansion until Wisconsin DOT performs a better traffic analysis, goes through the public feedback process for environmental review, and gets approved by the Federal Highway Administration. (To be super technical: the project could still process, but would have to do so without federal funding.) Given how well the case highlights all the implications of poor mileage forecasts, we took a closer look at the details.

The 19-mile section of S.H. 23 in question connects the small cities of Sheboygan and Fond du Lac. For years local officials have pushed to expand the two-lane, largely rural road into a four-lane expressway. The project made its way into the official transportation queue in 1999 by what looks to be a shady backroom political deal; here’s an internal Wisconsin DOT email, quoted in the new ruling:

This project was placed in the budget by a certain legislator. That legislator either got the project into the budget in a trade for support of something else or it was his/her hit for the budget. I believe it happened in the caucus process, which is late at night and with only some folks.

The highway project needed federal funding, so officials had to go through the federal environmental review process under the National Environmental Policy Act (NEPA). Public feedback to an initial draft in 2004 questioned whether traffic levels would necessitate an expansion to four lanes. But that plan met with Federal Highway Administration approval in 2010, then again when updated with supplemental information in March 2014.

The state’s decision boiled down to the belief, based on traffic models, that the existing two-lane stretch of S.H. 23 wouldn’t meet driving demands in the coming years. The table below, from the latest version of the environmental review, shows travel forecasts on various parts of the highway circa 2035.

Take the first road segment: 201185. The model estimated an average daily traffic volume of 17,400 cars by 2035—up 43 percent from 12,181 cars in June 2012. The only project alternative that has sufficient capacity for this much traffic is the four-lane build (in the final column), at 17,000 cars. None of the other alternatives do the trick: passing lanes, passing lanes plus new left-turns, or passing lanes with the occasional bump to a full four lanes in popular corridors.

But the forecast itself was too flawed to justify.

For 1000 Friends, the case basically came down to the fact that Wisconsin DOT’s rising traffic trends for S.H. 23 didn’t harmonize with everything transportation scholars know about peak car. The organization pointed to 2005 as the year when American driving leveled off (in fact, more localized data not used in court suggests Wisconsin hit peak car in 2004, at 10,959 annual miles per capita). It also outlined the social factors in play; via the ruling:

The plaintiff contends that there are reasons to believe that this trend in declining traffic volumes will continue well into the future. These reasons include the aging of the Baby Boom generation, a reduction in the percentage of Americans in the labor force (which translates into a reduction in the number of trips made to and from the workplace), and the fact that those in the Millennial generation are choosing to drive less than members of previous generations have.

So that’s Millennials: 1, WisDOT: 0, for those keeping score at home. 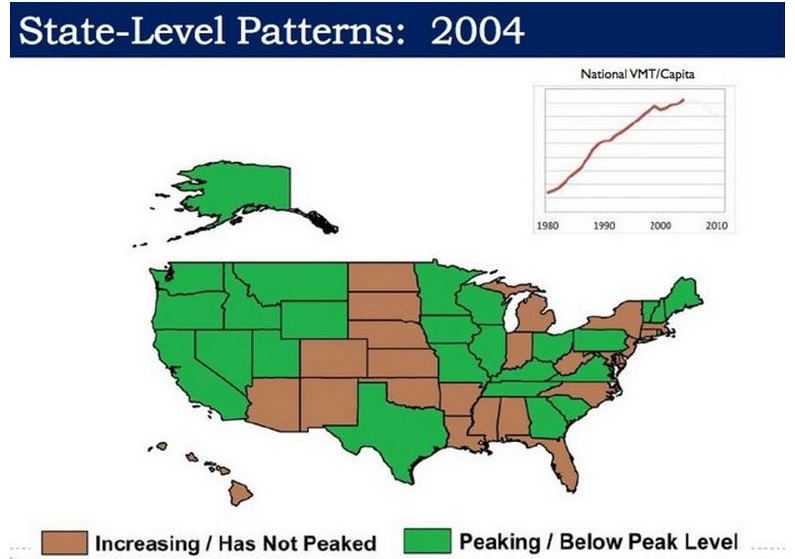 A number of states hit “peak car” in 2004, including Wisconsin. (Timothy Garceau)

Part of the problem was that state officials based the traffic models on an old analysis of regional growth through 2035. A newer analysis has since emerged, using 2040 as a projection date, and it shows the S.H. 23 corridor would grow “only about one-third as quickly” as DOT previously projected. But the court found no evidence that officials had recalibrated their traffic forecast based on this updated, significantly downsized population information.

In the absence of a mileage prediction that takes these new living patterns into account, the court ruled there’s no way the state could properly weigh the pros and cons of all the project options.

But another part of the problem was that the methods behind the traffic models were just plain unintelligible to the general public. Judge Adelman called them “inadequately described” in the environmental impact statement, and said that someone who reads that document would have “no idea” how Wisconsin DOT reached its traffic conclusions. Since justifying traffic methodology is a core tenet of NEPA, the court ruled that the state failed to meet that standard:

This failure is not harmless. Rather, it has prevented the plaintiffs [1000 Friends] from being able to understand how the defendants [Wisconsin DOT] arrived at traffic projections that seem at odds with current trends. Perhaps the defendants’ projections are accurate, but unless members of the public are able to understand how the projections were produced, such that they can either accept the projections or intelligently challenge them, NEPA cannot achieve its goals of informed decision-making and informed public participation.

So Wisconsin transportation officials will head back to the drawing board with their traffic models—and hopefully inspire other states to do the same.