I-94 East-West Expansion: a Fiscal, Social, and Environmental Mistake

Today, Governor Evers announced his intention to restart the I-94 East-West expansion near Story Hill in Milwaukee. This project is a fiscal, social, and environmental mistake.

The last time the I-94 project was proposed, it was estimated to cost more than $1 billion. The 3.5 mile highway expansion was eventually dismissed by Governor Walker for being too expensive and lacking public support. Wisconsin’s transportation budget has long favored massive highway expansion projects, doing so at the expense of existing local road infrastructure. Hundreds of millions of dollars of local road repairs are being delayed, yet this project is being reconsidered even as local roads continue to crumble and transit is woefully underfunded.

Wisconsin’s decades long focus on highway transportation investments has worsened the region’s racial and economic segregation, undermining communities of color and the disability community. In 2014, the federal government found that the Zoo Interchange caused “irreparable harm,” to minority communities. This project on the same corridor is no different. Members of low-income and minority communities often lack reliable transportation options. Yet, this project is being reconsidered even at a time of heightened awareness about structural racism in Wisconsin.

Just this week, the Governor’s Task Force on Climate Change is holding public hearings on potential solutions to reduce Wisconsin’s climate emissions. Transportation is a leading contributor to Wisconsin’s greenhouse gas emissions. To consider committing more than $1 billion to a project like this – that will put more cars on the road – is dangerous and irresponsible. Expanding I-94 East-West runs counter to the administration’s commitment to equitably reduce Wisconsin’s climate emissions, yet, this project is being reconsidered even as the consequences of climate change become increasingly dire and very real to Wisconsinites.

Given the fiscal, social justice, and environmental consequences of this project, we urge Governor Evers to reconsider. The money required for this project would be far more valuable supporting local roads, walking, biking, and transit across Wisconsin. 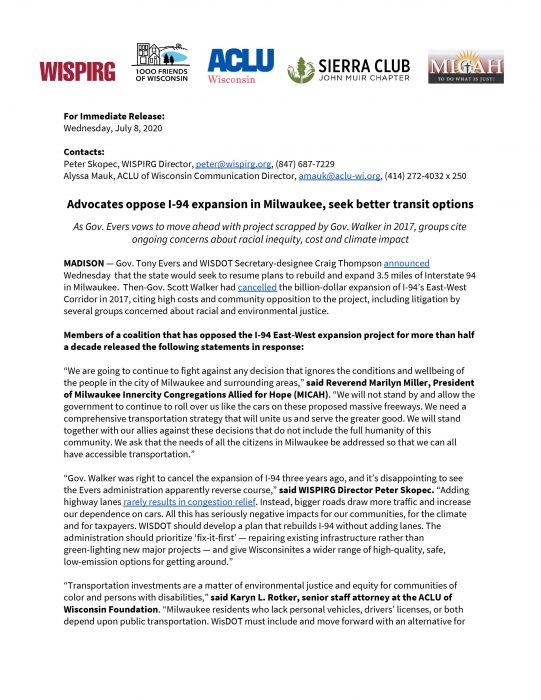