WisDOT has failed to keep up to its own goals when it fails to seriously consider a transit alternative by saying it is out of its jurisdiction.

Their long-range transportation plan states “The department will seek to streamline and consolidate complex and disjointed funding and operating structures. In addition to more efficient operations, improved coordination will support more transit options for the public, improve access to jobs, and expand the area accessible by transit (including areas on the urban fringe)”.

WisDOT did not independently develop a transit alternative for the project. They refer to the South East Wisconsin Regional Planning Commission’s (SEWRPC) regional transit plan, finding it comprehensive enough to preclude the need for their own alternative. Page 2-30 of the DEIS states ”SEWRPC independently concluded in its regional plan that doubling transit revenue service miles in the region would not eliminate the need to add capacity on I‐94.” 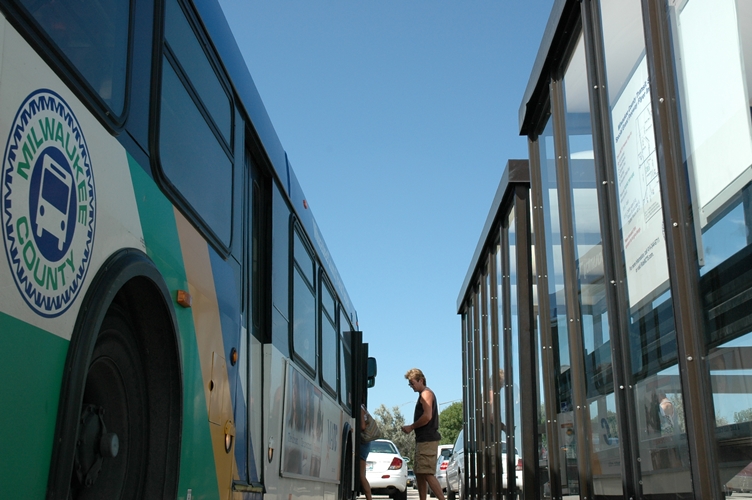 WisDOT is summarily dismissive of transit improvements as a viable option on the corridor, without appearing to have made any real analysis of potential ridership projections.

It is however noteworthy that expansion of the corridor could be avoided, by WisDOT’s own estimate through expanding transit (page 2-32). “If increased transit ridership alone were to avoid the need to add a lane to I‐94, transit ridership on eastbound I‐94 in the morning rush hour and westbound I‐94 in the evening rush hour would need to increase about three‐fold, to between 2,000 trips (eastbound) and 2,200 trips (westbound), to avoid the need to add capacity (one freeway lane can carry a maximum of 2,000 to 2,100 vehicles in an hour). 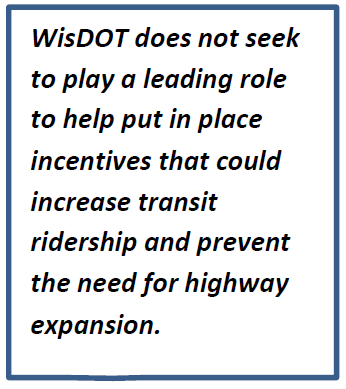 The DEIS goes on to say “Without a strong incentive to use transit, such as increased downtown parking rates, decrease in car ownership, or something that significantly increases the cost of commuting by single‐occupancy vehicle, it will be difficult to achieve the dramatic increase in transit ridership required to avoid the need to add capacity. These incentives are outside WisDOT’s jurisdiction.”

For example, a 5% reduction in traffic volumes on a congested highway (for example, from 2,000 to 1,900 vehicles per hour) may cause a 10-30% increase in average vehicle speeds (for example, increasing traffic speeds from 35 to 45 miles per hour).

WisDOT is summarily dismissive of transit improvements as a viable option on the corridor, without appearing to have made any real analysis of potential ridership projections.

Even assuming there is a need to remove 2000 cars off the roadway in peak-hour, a three-fold increase in transit ridership on the corridor is not unimaginable. For example, upon construction of the Blue Line transit system between downtown Minneapolis and St. Paul in neighboring Minnesota, actual ridership estimates six months into operation already exceed initial projections for 2030 [18]. It is not unlikely that an additional 1300 car-users could switch to transit upon investment in a viable system in Milwaukee.

It is important to keep in mind that WisDOT’s projections of increased traffic volumes and resulting congestion look out 25 years into the future – meaning that expanded transit services would not need to immediately remove 2000 cars from the highway, but rather the shifting of more and more commuters from single-passenger automobiles to robust transit services could occur over a number of years.

It is also worrying that WisDOT, as the state transportation agency does not seek to play a leading role to help put in place incentives that could increase transit ridership and prevent the need for highway expansion – and instead seeks to wash their hands off any responsibility.