Lack of Cost Benefit Analyses and Disregard for Economic Costs

WisDOT does not take into account the huge maintenance and rehabilitation costs the expanded highway will require. In addition, there is no clear understanding of the economic benefits the expansion will provide due to a lack of cost-benefit analyses. The total capital cost of expanding this 3.5-mile stretch of highway is greater than the entire annual roadway maintenance and rehabilitation cost for every single highway and road in Wisconsin.

Is this really the best way to spend $1.2 billion, when the transportation fund is purportedly facing a shortfall of millions of dollars?

In WisDOT’s latest budget request to the state legislature, the agency predicts a shortfall of close to a billion dollars in the coming biennium and recommends a slew of measures to increase revenues that include raising the gas tax, increased borrowing and additional taxes and fees on drivers. For this project, the DEIS estimates the cost of the ‘modernization’ alternative at $1.15 billion (DEIS pg 3-123).

The alternatives will also cost the city over $5 million through the loss of taxable land base. It is noteworthy that the capital cost of improving this 3.5 mile stretch of freeway is greater than the yearly roadway maintenance and rehabilitation cost for the entire state of Wisconsin [23]. 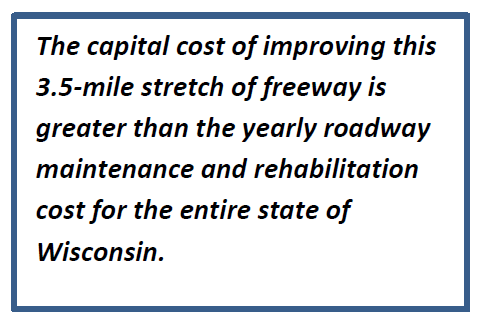 Time savings benefits also seem negligible – there would only be 3.5 minutes saved in the evening peak hour in 2040 according to WisDOT (pg 3-142).

At a time when funding is purportedly scarce, it is essential to ensure that every dollar invested in a transportation project provides the maximum possible return, for which it is necessary to carry out a cost-benefit analysis.

However, WisDOT has conducted no such study and simply reports the estimated cost of their chosen alternatives. The cost estimates provided only include the capital investments that need to be made and do not consider future maintenance, rehabilitation and repair costs.

A USDOT sponsored study investigated scenarios where transportation planners stopped building freeway capacity and found that in the first 20 years of a ‘no-build’ scenario there was a 15 to 20 percent reduction in travel delays from congestion.

WisDOT has simply chosen to ignore this evidence and push for infrastructure spending that is amongst the highest in the state.

Other DOTs are finding innovative ways to competitively evaluate projects before deciding on a final alternative. For example, Oregon DOT included seven goals in its state transportation plan and developed a program called Mosaic – a cost-planning tool that takes into account each of those goals. The tool compares different categories of investment – such as highway expansion and transit investment and shows how they stack up against each other in terms of a benefit/cost ratio [26].

There is evidence that urban freeways disrupt local businesses and cause detriment to urban downtowns [14]. People driving on the freeway will not patronize local businesses due to a lack of access to the street grid.

Environmental costs from urban freeways are estimated to be $590 million nationwide [27]. Without conducting a thorough cost benefit analysis, simply selecting a highway expansion option amounts to gross negligence and the willful misuse of hundreds of millions of taxpayer dollars.