Local roads in Wisconsin are in terrible shape because the legislature is taking money meant for local road repair and spending it on unnecessary freeway expansion projects. Tell your legislator “No more freeway expansion” – return your gas tax dollars to your community to repair local roads. Read our press release.

One unacceptable proposal would allow communities to tax themselves again for local road repair. This is unfair and unneeded as you are already paying for this when you fill up at the pump or when you pay your property taxes. Too much of your money is going towards freeway expansion while your local roads crumble.

The map below shows the condition of local roads in the state by assembly district. Type your address in the search bar, and the map will show the assembly district in which your home is located. Click on the map (once) to see your district’s grade, the percentage of local roads that are in poor shape, and your legislator’s information. Clicking on your legislator’s picture will take you their website – where you can tell them to vote for less spending on freeway expansion, and more on maintaining our existing local infrastructure. 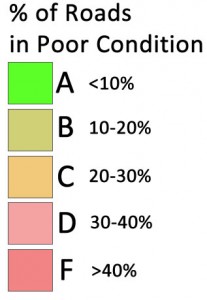