Millennials on the Move – Report

New report shows young adults in the state want alternatives to car culture.
A new WISPIRG Foundation study released today found that investing in public transit and walking and biking infrastructure could help Wisconsin attract and retain young adults. The report, entitled Millennials on the Move, also indicates that Wisconsin’s current transportation policy priorities – which have focused on expanding major highways at the expense of maintaining existing infrastructure and funding public transit, walking and biking – will fail to create the type of system young adults desire and Wisconsin needs.

“Car culture no longer represents the ‘American Dream’ for many young people,” said Emma Fisher, WISPIRG Foundation organizer and lead author of the report. “By rethinking our transportation spending priorities and focusing on forward-thinking investments, we could make Wisconsin more attractive to the young people that our communities need to thrive.” 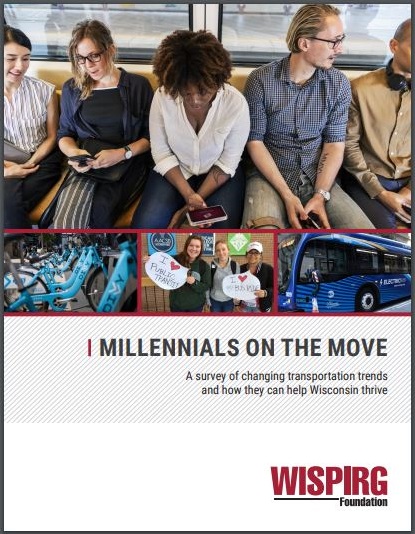 To better understand the changing preferences of young Wisconsinites, WISPIRG Foundation staff and volunteers surveyed more than 600 college students on 24 Wisconsin campuses during the 2017-18 school year. The key findings of the survey include:

“As Madison continues to compete in an ever more aggressive workforce market, we must do everything we can to create a quality of life young people crave,” said Jason Ilstrup, President of Downtown Madison, Inc. “A sense of place is more important than ever.  By creating a modern, multimodal public transportation system, we will send a message to all young people that they are welcome to build their home in Madison, Wisconsin.”

Millennials on the Move highlights several Wisconsin communities, from Eau Claire to La Crosse to Madison, that are already working hard to integrate multimodal, 21st century transportation options, and that are effectively attracting young adults. Madison – where local officials have created a network of protected bike paths and lanes, improved walkability and pedestrian safety, and developed a robust public transit system – is considered a great place for young people to live. Millennials made up 26.8 percent of the city’s population in 2015, which is the fifth highest percentage of Millennials in any U.S. city.

“When my family was looking to purchase a home in Madison, we were looking for a location with easy access to the places we work and spend our free time,” said to Malorie Hepner, architect with OPN Architects. “Our home is near major bus routes, one block from a bike boulevard, is within walking distance on many amenities, and still allows for car use.”

“These findings should give state leaders pause as they put together the next transportation budget,” Fisher added. “Creating a modern and effective transportation system starts with rethinking our spending priorities. Wisconsin’s leaders should stop wasting resources on highway expansions that are unlikely to meet tomorrow’s transportation needs. Instead, we should focus on maintaining the infrastructure we already have in place. We must also invest ambitiously in public transit within communities and between cities and in the walking and biking infrastructure that will make Wisconsin a better place to live for people of all ages. ”