It’s difficult to visualize the damage that downtown freeways have caused our cities. For many, these highways have always been there, providing economic development and efficient travel into cities from the suburbs. Their role as a cornerstone of racial segregation, and their destruction of municipal budgets and the urban fabric has left our collective memory. It’s hard to appreciate what was lost. One way to fully realize this loss is to review a highway project that was conceived and ultimately abandoned.

In 1955, Madison considered such a project. It was called the “Central Area Traffic Loop and Johnson Street Expressway.” The project would have placed an interchange and sunken highway right through the heart of Madison’s downtown. It would have required hundreds of relocations, taking blocks of businesses and homes off the tax roll, while injecting particulate matter into downtown and tearing the vibrant urban fabric apart. 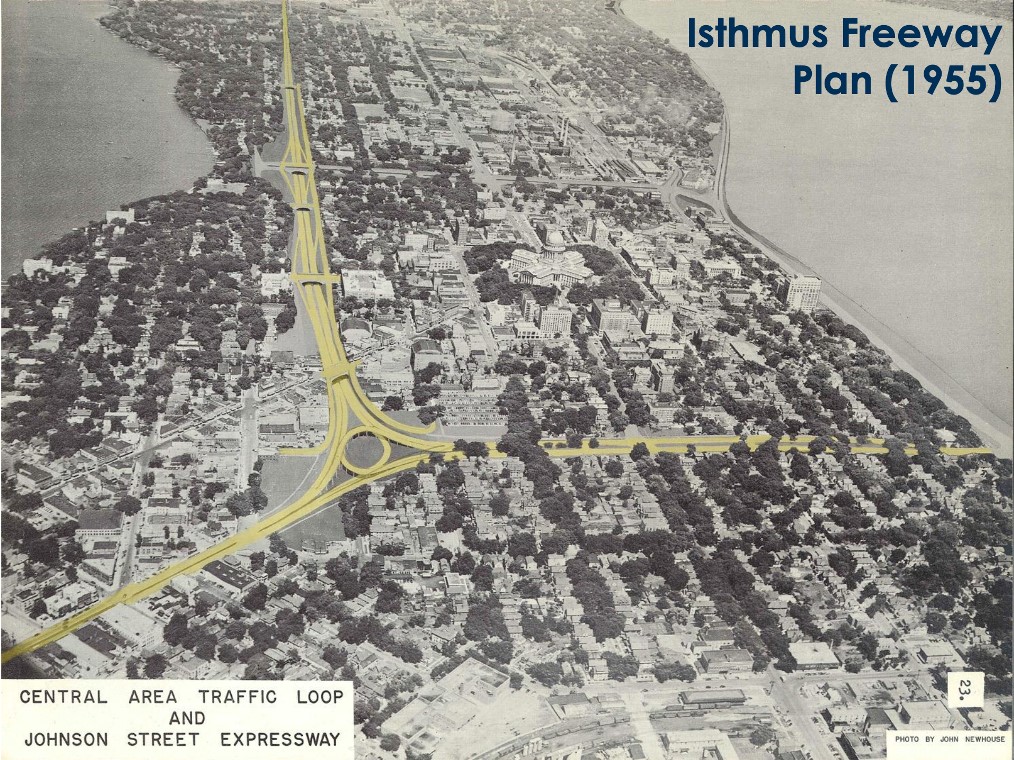 Today, Madison is considered one the country’s most desirable place to live. The walkable downtown has supported a thriving local economy. It is the foundation of the city’s sense of place. If the expressway had been built it would have separated neighborhoods, irreparably damaging the flow and charm of the city which is the bedrock of its success.

In retrospect, it’s easy to see why this project was such a bad idea. It’s no different to the downtown expressways in Milwaukee, expect one came to fruition and the other was abandoned. One has broken a city into pieces, the other supports thriving neighborhoods and local businesses.

Yet, Wisconsin continues to pursue a policy of highway expansion, like the I-94 East West expansion that has consumed valuable land downtown, destabilized neighborhoods, and exposed communities of color to increased vehicle pollution and more pedestrian accidents.

Instead, we need to invest in public and active transportation infrastructure that supports vibrant neighborhoods. Infrastructure that will decrease our emissions and improve quality-of-life rather than destabilize our communities.

This is #6 in the Land Use and Transportation Connection Blog Series – read all of the posts here.