This week Governor Tony Evers will be briefed on the proposed Interstate 94 highway expansion project in Milwaukee.

This project should not move forward – especially in a year with public health and economic crises, increased awareness of racial disparities, and Governor Evers’ task force on climate change. Additionally, the rationale behind the project is shaky at best. The proposed I-94 highway expansion project is a fiasco.

Expanding three miles of I-94 E/W in Milwaukee is a public health nightmare. Adding lanes to highways increases the number of cars on the road, worsening air pollution. Earlier this year, a Harvard study found that air pollution is linked with higher COVID-19 death rates. Additionally, Black US residents are experiencing a disproportionate impact from the virus, with double the death rate as white residents. Adding air pollution to neighborhoods in Milwaukee, which has some of the greatest racial disparities in the country, is unacceptable. Adding lanes and more pavement also increases polluted runoff and exacerbates flooding of local streams.

This project also comes with an enormous price tag – more than $1 billion. This is massive, especially during an economic crisis in which our Governor has voiced concerns about the $2 billion state budget shortfall over the next year. This expansion project also comes at the expense of many opportunity costs within the state’s transportation budget: repairing local roads around the state, improving public transportation infrastructure, and re-establishing TAP funding for walking and biking. Each of these programs are fractions of this one proposed project’s expense.

I-94 also presents major racial justice concerns. Members of low-income and minority communities often lack reliable transportation options and don’t have access to cars, so they rarely benefit from billion-dollar road projects like this one. In fact, Wisconsin’s decades-long focus on building and expanding major highways has actively harmed members of these communities by worsening racial and economic segregation, especially in the Milwaukee region. The trend of extracting resources from Milwaukee is not new. The city of Milwaukee lost 105,000 in population between 1960 and 1980 – 14% of the population – as a direct result of the building of the freeway in the 1960s. In 2014, the federal government found that the Zoo Interchange construction and expansion in Milwaukee caused “irreparable harm” to minority communities. This I-94 expansion project, on the same corridor, is no different. It’s particularly hurtful that the Governor would revive this project at a time of heightened awareness about structural racism in Wisconsin.

As if the public health, economic and racial justice impacts aren’t enough, this proposed project will also fuel the climate catastrophe. The transportation sector is the largest contributor to greenhouse gas emissions in the U.S., and personal cars account for the biggest chunk of transportation emissions. Expanding highways encourages more people to drive, and this will increase carbon emissions. Expanding I-94 is in direct conflict with the expressed goals of the Governor’s Climate Task Force to equitably cut carbon emissions. Here’s the bottom line: climate-friendly governors do not expand highways.

And finally, the rationale behind this project is shaky at best. The Department of Transportation’s 2021 – 23 Biannual Budget Request Issue Paper about Southeast Mega Project Funding states congestion, bridge age and safety as the three primary reasons to expand this highway. Let’s break that down:

1) Congestion: the DOT Issue Paper claims that congestion would increase from 12 to 14 hours of daily congestion between 2020 and 2060 if the highway was replaced in its current footprint rather than adding lanes. The data behind this assumption is faulty because it does not take into account the impact of the pandemic, increases in working from home, and the stagnation of Milwaukee’s working-age population, the main contributor to rush-hour congestion. Additionally, Transportation For America’s recent report The Congestion Con has found that adding lanes to highways almost always makes congestion worse within two years of the project’s completion.

2) Bridge age: with most of the bridges in the 3.5 mile stretch of this project dating back to the 50s and 60s, it is true that repairing infrastructure is important. Bridges can be repaired and replaced as is without the construction of additional lanes.

3) Safety: the DOT issue paper states, “As traffic increases, safety and traffic operations on this corridor will continue to deteriorate.” A priority for addressing safety concerns can be decreasing traffic on the highway by replacing the highway in its current footprint instead of adding lanes that increase traffic and funding transportation alternatives like public transportation to decrease traffic on this corridor.

Given the poor rationale for this project, it is clear that political motives are behind this instead of the health, safety and financial wellbeing of Wisconsinites.

Given the negative public health, economic, environmental, racial justice and climate impacts from this project, the Department of Transportation and Governor Evers should halt this project proposal and instead repair the highway in its current footprint. We are entering a new era; let’s not repeat the mistakes of the past. 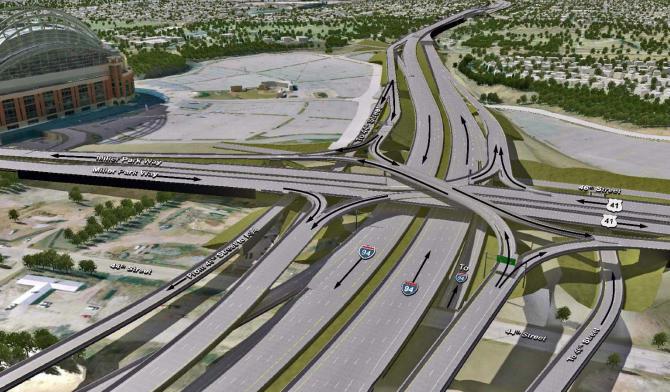 I-94 Expansion. Rendering from WisDOT.