On May 20, during Joint Finance Committee review of the Biennial Budget, a policy item was inserted in DNR motion #520 related to shoreland zoning that will have a huge impact on water quality in Wisconsin. We join many other groups, including lake associations and county representatives in requesting this policy language be removed from the budget. The language both prohibits counties from enacting or enforcing stronger standards than the statewide minimum standards, and also relaxes some of the provisions in the state’s standards. Shoreland zoning has already been the subject of compromise for many years, so seeing policy language that has no fiscal impact inserted into the budget with no opportunity for stakeholder or public input has many water users and lakefront property owners scratching their heads.

Shoreland Zoning – Defining the Importance of Local Control
Shoreland zoning is put in place to safeguard our waters from excess runoff from commercial and residential development. It is an important tool in areas where water quality is poor, and property values and tourism have suffered. But it is also a tool used in many northern communities to protect especially vulnerable high quality waters – the pristine northern lakes that define Wisconsin. Shoreland zoning is really the epitome of local control – the state sets a minimum, but gives communities that are experiencing more intense problems or have more vulnerable waters to protect the ability to go further.

Take the example of Dunn County, which has a stronger shoreland zoning standard than the state because of huge water quality problems on the Red Cedar watershed. The watershed contains some of the most impaired waters in the state. Dunn County spent a lot of money and time creating their own shoreland zoning ordinance to address the unique problems the area faces. The Red Cedar watershed is almost ready to submit their Total Maximum Daily Load (TMDL) plan, which is required under federal law for impaired waters. That plan contains runoff reduction estimates based on Dunn County’s current strong shoreland zoning ordinance, which would be nullified by this budget language. That means they would have to seek reductions elsewhere, potentially at a higher cost. 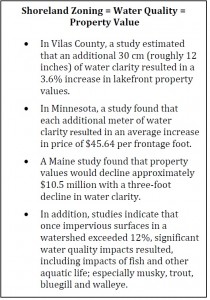 Remember that shoreland zoning rules were updated in 2009 with the support of all stakeholders, then re-written again with less input and support in 2013. This sweeping policy revision added to the budget bill now contains no input on this critical clean water issue. Over thirty counties currently have shoreland zoning ordinances that would be impacted by this budget language. Those are counties that spent years and thousands of hours of public hearings to complete their required work related to shoreland zoning.

Shoreland Zoning Policy Changes Undo the Progress Made on Polluted Runoff Control
We know legislators recognize the growing problems of polluted runoff happening across our state, and the need to address those issues. To that end, several legislators worked hard to reverse cuts made to polluted runoff prevention efforts in the budget, restoring $3.5 million of the $6 million in cuts, including funding for county conservation staffing and nonpoint grants. We are concerned this shoreland zoning language and the resulting decrease in water quality will undo the progress we have all been making for cleaner Wisconsin waters.

Shoreland zoning policy that has had no public input and has no fiscal impact does not belong in the budget bill. The proposed changes severely hamper local communities’ ability to address water quality issues, which can impact local economies as well as the health of the environment and undermine their ability to meet the requirements of federal law. This budget proposal puts Wisconsin’s treasured water resources in peril and undermines years and years of work and public engagement that has gone into our state’s progress on water cleanup. We respectfully ask that you remove shoreland zoning policy from the budget.