An important element of livable communities is how much space we devote to different modes of transportation. It is no secret that most American cities strongly favor cars. This picture shows how much space in downtown Detroit is devoted to space for storing cars. Parking garages and lots aside, many streets have been engineered to allow for faster vehicle travel at the expense of people riding bicycles and walking. The result is a less safe and less pleasant environment for non-car transportation, increased pollution, increased wear and tear on roadways, and increased congestion on those bigger and faster roadways. Conversely, streets with narrower (and sometimes fewer) travel lanes, added bike lanes, properly priced parking, and strong pedestrian infrastructure have positive effects on sustainability and community vibrancy.

One way of measuring the walkability in a community is by comparing the amount of paved roadway to the amount of space for buffer strips and sidewalks. In Madison, Wisconsin, we used a database of street information and aerial imagery to depict the ratio of pedestrian space to total right-of-way on all the city’s streets: 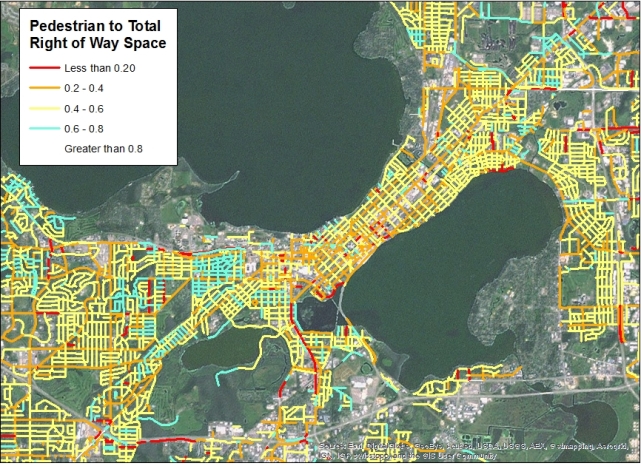 Obviously, the space allocated to pedestrians is only one of many metrics by which we can evaluate an area’s livability and sustainability. However, using increasingly high-quality data to analyze land use patterns and infrastructure priorities can help us identify areas where targeted improvements to the pedestrian experience can make the biggest difference for communities.