This post is more personal than the usual content Susan writes on Active Wisconsin. Here she shares some of her history as a biker, and why she decided to sign up for Ride Across Wisconsin, which is a fundraiser for the Wisconsin Bike Fed. If you want to contribute to Susan, go to her fundraising page. 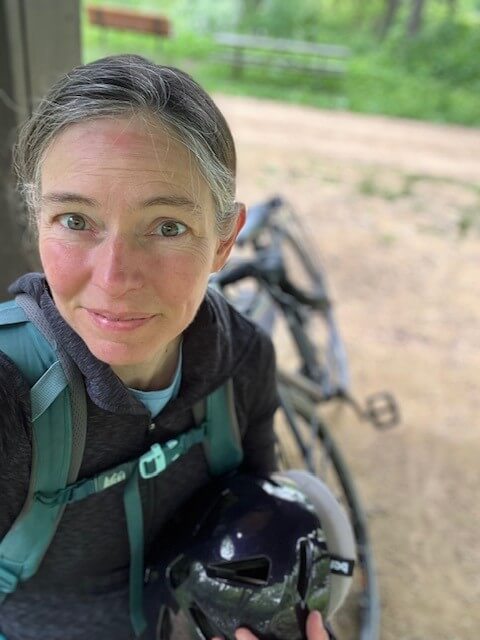 Susan Gaeddert taking a break on the Military Ridge Trail near Mt. Horeb, WI in early summer 2022. Photo by the author.

I didn’t learn to ride a bicycle until I was 9 years old. My ride was a quintessential girl bike from the 1980s with a pink frame and a banana seat and pink streamers flowing out of the handlebars. After a couple weeks with training wheels, I eventually got the hang of it. I rode around the neighborhood some, but unfortunately in my small Kentucky town, there really wasn’t any place to go on two wheels. A pink Schwinn bike with a banana seat, much like the one the author had as a child. This photo lacks the handlebar streamers, alas.

Once I grew out of that bike (and, thankfully, my Barbie phase), I didn’t ride again for more than a decade until I moved to Madison for grad school, where I studied piano at the school of music. Madison is famously bike-friendly. Determined to fit in, I bought a used hybrid at Budget Bikes and faithfully rode to the UW campus every day. This lasted until the first snowstorm of the season prompted me to familiarize myself with the bus system.

Snowstorms notwithstanding, I’ve actually been a bike commuter for most of the time I’ve lived in Madison. I’ve ridden through rain, heat waves, single-digit temperatures, and even the first 7 months of pregnancy. When my kids were little, I hauled them to swim lessons and preschool classes in a bike trailer. I’ve biked to more gigs decked out in concert black than I can count.

Why am I a devoted bike commuter? Honestly, my reasons are more selfish than sanctimonious. Sure, I’m happy to reduce my carbon footprint and save some gas by not driving a car every day. But mostly, I like to get around by bike because: 1) it’s good exercise, and 2) driving and parking in Madison – especially in the downtown/campus areas I frequent – is expensive and annoying. I also lack patience and would rather endure the discomfort of biking in bad weather than wait for a bus. You get used to it. Once I decided it was time for a career change, I think it’s fair to say that riding a bike around the city so much played a large part in my decision to study urban/regional planning. Susan is dressed in concert black and wearing a bike helmet. She is carrying a backpack with flowers, which were a thank you gift from a performance, sticking out of the back. Photo by the author ca. 2017.

Despite all these years commuting on two wheels, I was never a recreational biker. It did not interest me to get on a bike and ride without a destination. Until, that is, Ride Across Wisconsin 2022. I surprised myself by signing up. I’ve never been an athlete, much less an endurance one. However, there are a lot of good reasons to participate: RAW supports Bike Fed, an organization we often work closely with at 1000 Friends; the ride starts in La Crosse, an Active Wisconsin community; it’s an opportunity to see more of Wisconsin from the viewpoint of the state trail system, etc. Finally, I suppose I thought I needed a challenge.

And what a challenge it has been! Other than childbirth and a handful of mountain hikes, this is the most physically demanding endurance event I’ve ever attempted. It’s also the first one this side of 40. Even the “easiest” option covers 165 miles over two days, and most of those miles are through the driftless region – beautiful, but hilly. It’s daunting. I am trying not to panic. 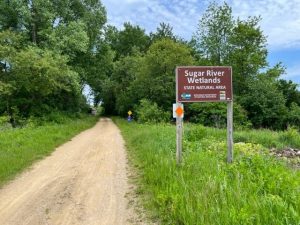 A portion of the Military Ridge State Trail in the Sugar River state wetland area. Photo by the author.

But training for Ride Across Wisconsin is about much more than just putting in a lot of miles on the bike. They say half the challenge of an endurance event is mental. Turns out I was built for that part. I spent years training to be a professional musician, and then many years after that making a meager living as one. That requires a different kind of endurance. It certainly takes physical stamina to play the piano for several hours a day at a high level, but even more demanding is the mental stamina required to cope with the psychological jujitsu of perfectionism, imposter syndrome, and performance anxiety, all while you are spending most of your time alone in a practice room. I’ve been through that and managed to come out the other side more or less in one piece. Surely that counts for something. 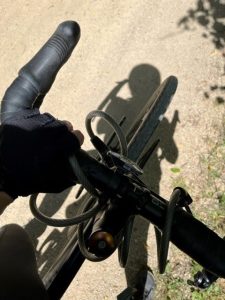 Overhead view of bicycle handlebars, a coil lock, and gloved hands on a sunny day over a crushed gravel trail. Photo by the author.

Fortunately, the ride in August is not a race, nor is it really a performance. I do not have to be fast. I do not have to demonstrate artistry. I do not have to be in perfect form. Most of the time no one will be watching, and even if there are bystanders, they’ll presumably be cheering us on, not scrutinizing our technique. I simply have to get from Point A to Point B safely, ideally before sundown.

Besides, I’ve been pleasantly surprised by how much I’ve enjoyed training. Those long weekend rides are a perfect time to clear out mental clutter from the week. An hour or so into a ride, I get into a headspace not unlike what I experience in long practice sessions, where I move past the little anxieties and distractions bothering me and am soothed by repetitive movement, fully absorbed in the task at hand (or foot, as it were). It is meditative. It is calming. It is pleasantly exhausting. And like preparing for a music performance, the only way to succeed is to start with a few months’ lead time, stick to training, and keep an eye on the finish line with the stubborn determination that it will all work out.

If you’ve followed my progress on Instagram you’ve seen photos and video clips from state trails near Madison, with highlights of trail infrastructure, public art, nature sightings, and more. You may have noticed that I like to ride solo. It’s true that I prefer solitude and have not sought out any groups to do training rides with. I confess I’m a little apprehensive about riding with a large number of people during RAW; it is both exciting to anticipate the energy and motivation that comes with riding in a group and intimidating to think that I may very well be the last one out there. I could be the RAW caboose! Regardless, I plan to document the experience, and I will certainly post an update after the ride and report on how it goes! 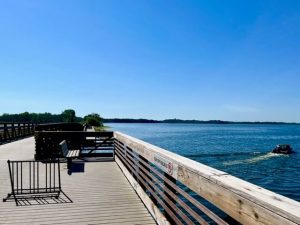 View of the Yahara River Trail bridge on a sunny summer day. Photo by the author.

Thanks to the generosity of family and coworkers, I have exceeded my goal of raising $165, which covers the cost of my registration. If you want to give me a motivation boost, consider a contribution to my fundraising page. The money goes directly to the Wisconsin Bike Federation and does not benefit me or 1000 Friends of Wisconsin.