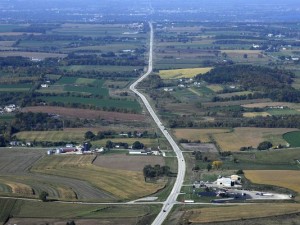 Roadbuilder lobbyist Craig Thompson took on an opinion piece that we wrote for the Milwaukee Journal Sentinel, calling for less spending on highway expansion.  Not surprisingly Mr. Thompson presented factually inaccurate and misleading arguments in his critique of our work (read Thompson’s opinion).

Here is our point by point response to the roadbuilder’s claims:

1)      Thompson claim:   Federal funding for the highway 23 project was not killed by our lawsuit.  WisDOT simply has to provide more information to the judge before construction can begin.

Actually, this is the strongest case made by the roadbuilders.  Technically, yes, all WisDOT has to do is produce information showing how they got their completely unrealistic traffic projections.  Keep in mind that we have been asking for this information for 15 years – 4 of them in a federal lawsuit.  WisDOT couldn’t produce them for 15 years but somehow they just might in the next 90 days.  I guess we are skeptical that they can do this but who knows? Mr. Thompson also fails to mention that DOT’s attempts to further the project were illegal due to their failure to disclose the inner workings of traffic projection models.

2)      Thompson Claim: Traffic “has increased several years in a row now and is back to pre-recession levels. “

This is a very simplistic statement that seeks to highlight two years of minor traffic growth, while completely disregarding a decade long trend of Americans driving less.  Experts at the State Smart Transportation Initiative found that “even with the recovery in GDP and employment, per capita VMT remains 6.6 percent below its peak in 2004. And even accounting for population growth, total VMT is still 0.5 percent below its 2007 peak.”  It is extremely unlikely that traffic will grow at the rate we saw in the 1960’s. Attempts to justify more highway capacity by the roadbuilders on this basis are dishonest and only seek to line their pockets at taxpayer expense.

3)      Thompson claim:  We can’t fund local roads by cutting highway expansion projects because there aren’t any savings in this biennium.

Another odd argument since Mr. Thompson goes on to point out $87.4 million of savings that would occur in this biennium – more than the total we recommend for local road maintenance.  Even stranger is Mr. Thompson’s curious omission of the savings that would accrue from not building Highway 23 – over $60 million. We have not advocated for all the money saved by cutting projects going towards other transportation needs – instead we would eliminate irresponsibly putting a staggering $380 million on the state’s credit card.

4)      Thompson saves the best for last: “To blame the $250 million cut to the UW system and the funding challenges for K-12 education, as well as police and fire protection, on the transportation budget is breathtaking in its irresponsibility.”

Really???  According to Mr. Thompson, increasing state spending on highway projects doesn’t affect other state spending.  We can only assume that this means DOT mints its own currency.   All of the money comes from taxpayers – the choice is whether we spend it on needless highways or the basics – like education, healthcare, fire and police.The real irresponsibility comes from pouring billions of dollars into highways which, as the Highway 23 ruling showed -are based on circumspect data –at the expense of justified and needed programs.