The new Rochester Village Hall has become the first office building in Racine County to receive an EnergySTAR rating from the U.S. Environmental Protection Agency, due in part to the careful building design and landscaping incorporated into the project. By placing the building along an existing tree-line, architects from Anderson Ashton Design Build made strategic use of the shade provided in summer and energy from the low sun in winter.

Much of the surrounding green space, known as Rochester Commons, was left undisturbed and provides expansive views for village workers and visitors.

Rochester Village officials had clear priorities when they sought to replace their 70-year-old village hall: a building that would be functional, with minimal up-front costs and maximum operational savings.

With thoughtful input from village officials and the expertise of architects and construction professionals from Anderson Ashton Design Build, the Racine County community created a building that delivers value beyond those demands.

It provides 40 percent more space for staff and residents, yet costs less to heat, cool and power. The Village reduced per square foot of annual energy cost by 33 percent in the first year of operation – during one of the harshest winters on record. The building is 75 percent more efficient than similar buildings in the region and surpassed the standards to receive ENERGY STAR certification, through the Environmental Protection Agency.

It is one of 582 buildings in Wisconsin that have received ENERGY STAR certification.

Just as important to the cost-conscious village officials, it proves that building “green” doesn’t burden taxpayers. The construction remained within budget, and the features that produced the energy efficiencies were simple and immediately cost-effective.

“We were very happy that we could keep it under budget and get more than I think we really thought we were going to get from the start,” said Ed Chart, a village trustee and chairman of the building study committee. In a series of meetings, Anderson Ashton architects sought to identify the priorities of the three full-time village workers who work in the building daily. In turn, they shared a full range of options, including solar/photovoltaic and geothermal systems for heating, cooling and electricity. Those options, though, cost more up-front and extend the return-on-investment payback. The architects and engineers listened to village workers, trustees and residents and followed their lead in selecting the best features to fit their needs.

“We appreciated Anderson Ashton’s approach to educating us on the financial benefits of different green features,” said Betty Novy, the village clerk/treasurer.

Windows, building placement and interior finishes were among the elements designed to conserve both environmental and financial resources. The building is L-shaped, with the most-heavily used portion stretched along an east-west axis to maximize the light from the southern exposure. Windows in a large meeting room, exposed to sunlight from the east and west, were installed near the ceiling line with light wells to bring the light deep into the room. Tinted glazing helps manage the radiant heating and light. 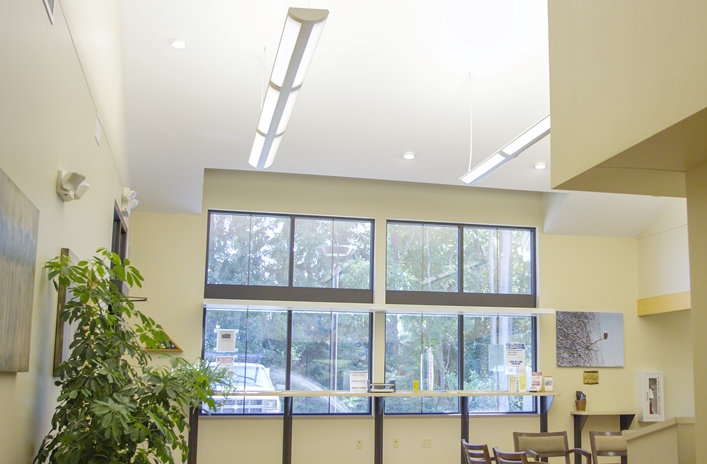 Shading devices attached to the building’s exterior control the interior sunlight. Treatments and designs incorporated into the interior walls draw light deeper into hallways and other spaces.

“What I appreciate the most, and I think what most people appreciate is just the natural sunlight that is pouring into the building without distracting or being a nuisance,” Novy said.

“We got, I think, the green that we needed to get while staying within our budget,” Chart said. “We didn’t put the geothermal in or wind turbines, because it’s expensive, but we got lighting that’s very efficient; we have a computerized system where the lights go off when they’re not being used.

“The air and heat are in the center of the building so it doesn’t have to travel far,” he said. “They just did it so we could save money without spending a lot of money.”

Rochester is a small but growing community in western Racine County, and the Village Hall is a business hub and gathering place for anniversaries and other celebrations. It not only represents a new standard for energy-efficiency, but a symbol of what’s important to the village’s 3,700 residents.

It blends seamlessly with the adjacent library and imparts a positive impression of Rochester, a big improvement from the 70-year-old fire station that had served as the Village Hall.

“Obviously, you like a pleasant view for people who drive up to the building,” Novy said. “We have private commercial entities come to us looking for approvals for buildings they want to build.

“It doesn’t look very good if we’re putting all sorts of requirements on their aesthetics and not keeping up our end of the bargain.”

The project demonstrates that smart design and careful selection of building materials can generate tangible savings and improve the working environment.