1000 Friends of Wisconsin was awarded a grant from COWS in partnership with three Green Tier Legacy Communities (GTLC) to improve community health by promoting pedestrian and bicycle access for children and families, specifically by addressing active transportation gaps to schools and parks. The three participating cities are Monona, Stevens Point, and Wisconsin Rapids. The project began in summer 2022 and will conclude at the end of the year with written reports that will be published here and on the 1000 Friends website. I have been collecting data and working with city staff in each community to identify areas with high pedestrian traffic in need of improvement so that we can plan a more thorough walk audit of each location this fall. By far the most fun part has been on-site visits to meet planners and park directors on their own turf, and to see with my own eyes the areas they want to address.

This is the second of a three-part series highlighting the Green Tier Legacy Communities who are participating in the safe routes project. 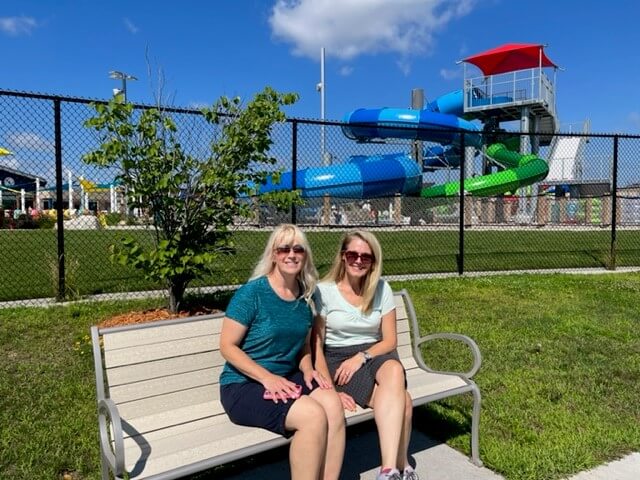 Dawn Desorcy (Parks & Recreation Coordinator) and Carrie Edmonson (Associate Planner) sit on a bench at Witter Park. Behind them is the new aquatic center.

A week after visiting Stevens Point, I took another trip to the center of the state, this time to visit Wisconsin Rapids. The seat of Wood County, Wisconsin Rapids is a small city with a population of just under 20,000 people, and home to some of the largest cranberry marshes in the country. On a beautiful Wednesday morning, I met Carrie Edmonson, Associate Planner, and Dawn Desorcy, Parks & Recreation Coordinator, at City Hall and we embarked on a brisk walking tour of the downtown area and trail network. 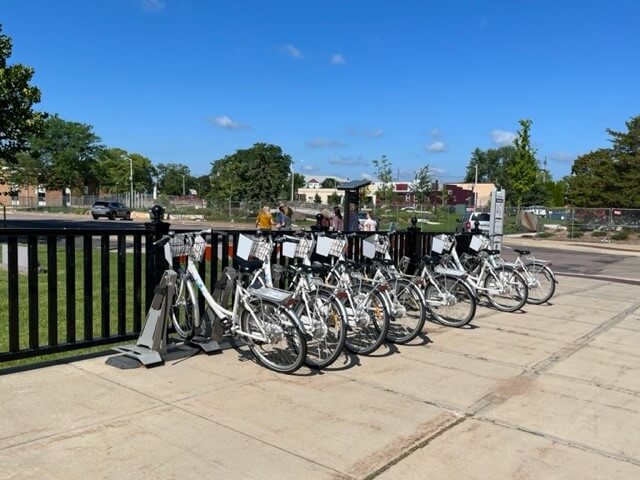 Dock of e-bicycles along the river.

The Wisconsin Rapids downtown has good pedestrian infrastructure in place, with wide sidewalks and well-marked crosswalks. An e-bike share run by Wood County has several stations around the city, including downtown, and a bike trail follows the river with brand new wayfinding signs that were installed just this last spring. 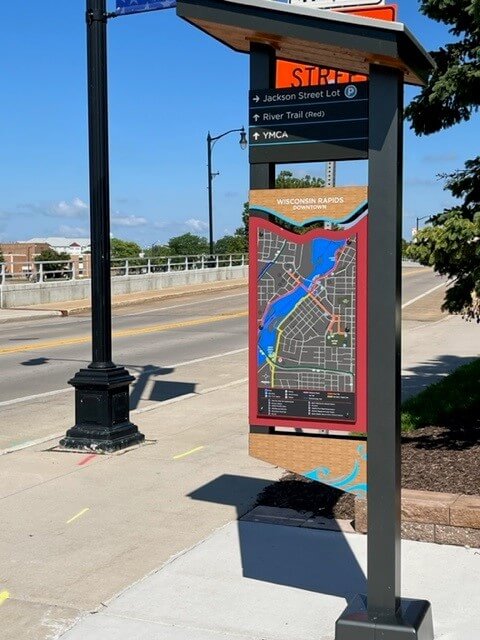 Wayfinding sign showing Wisconsin Rapids downtown area and multi-use trails. These signs are posted in various locations throughout the city. 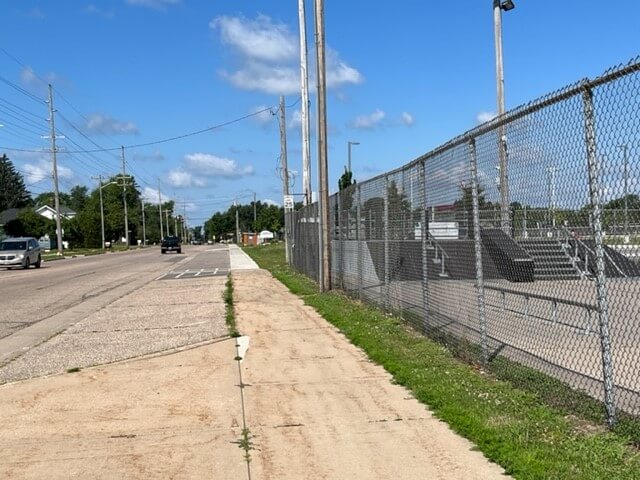 Narrow sidewalks and slanted parking make bike and pedestrian travel to and from Witter Park complicated, especially during baseball games.

One area of concern is the intersection of 8th and Chestnut, where a new municipal aquatic center opened in 2020 at Witter Park, just a few months after the Covid crisis hit. The aquatic center makes Witter the most popular park in Wisconsin Rapids during the summer. It is adjacent to a ballfield, so during minor league baseball games, traffic and parking congest the roads. 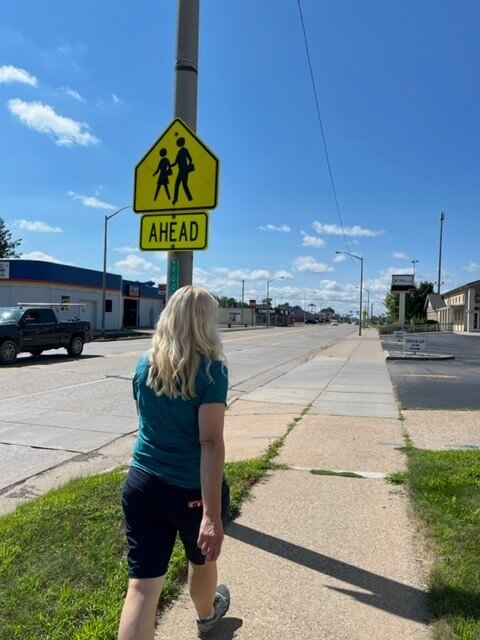 Dawn Desorcy walks along 8th Street, a typical “stroad” with wide lanes, no medians, frequent driveways, infrequent crosswalks, and other conditions that are considered hostile to pedestrians.

Additionally, 8th Street is what many active transportation advocates would call a “stroad”: a busy road with wide lanes designed to move traffic at high speeds that also functions as a street with commercial development and frequent intersections. Roadways like this exist in nearly every town and city in America, and 8th Street is just one example. There are sidewalks, but otherwise conditions for pedestrians and bicyclists are dangerous: traffic moves quickly, crosswalks are limited, and there are no medians. There are reasons to be optimistic about improvements, however. Wisconsin Rapids has updated landscaping rules since 8th Street was last reconstructed, and the addition of a popular Aquatic Center frequented by children and families are two strong reasons to re-imagine the 8th Street corridor when it is due for updates. Wisconsin Rapids is a beautiful city, especially on the riverfront. By the time we circled back to City Hall, Carrie, Dawn, and I had walked more than 4 miles along the trail and river and other parts of downtown! After we parted ways, I visited two other locations on their recommendation, the municipal zoo, and Mead Elementary School & Park, where I took some notes about parking, sidewalk access, and potential for bike routes. It is clear that 8th Street and the area around Witter Park is a high priority area for addressing pedestrian safety. 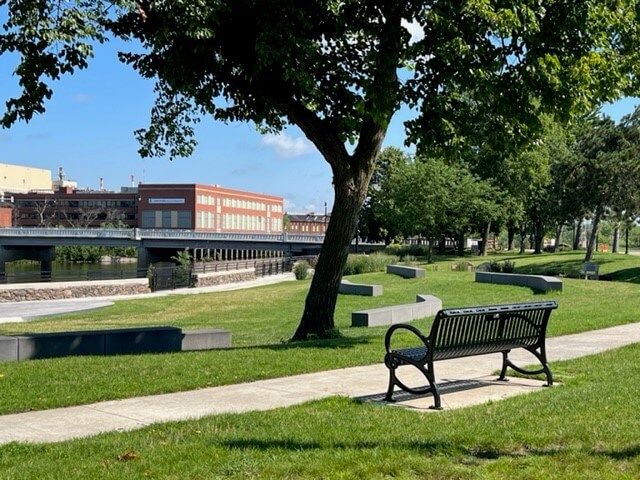 Veterans Memorial Park along the river in downtown Wisconsin Rapids, where weekly live music concerts are featured all summer long.

NEXT STEPS (no pun intended!)

I’m working with our GIS specialist to pull together some maps showing demographics, crash data, and environmental hazards. Those will be included in a preliminary report I share with Wisconsin Rapids staff, which we will use to plan a more detailed walk audit early this fall using the new tool kit from AARP.