Despite Wisconsin’s deep partisan divide, there’s one area of policy on which the state’s Republicans and Democrats emphatically agree: conservation.

Maintaining the state’s pristine, spectacular natural resources is that rare goal that rises above political wrangling. A bipartisan statewide poll released on March 18 by the Nature Conservancy, an environmental protection group, showed that Wisconsinites of both parties overwhelmingly support continuing state funding for land, water and wildlife conservation. Seventy-six percent of Republicans, 88 percent of independents and 97 percent of Democrats said the state should continue making such investments. 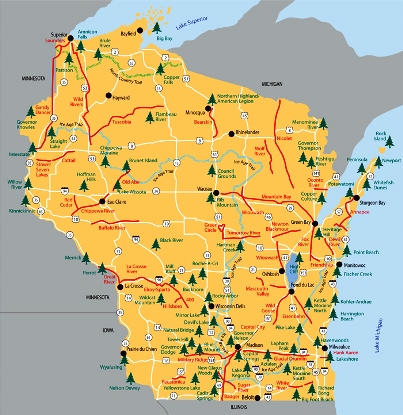 The findings create something of a dilemma for the state’s Republican leaders. They are faced with a budget presented by Gov. Scott Walker that’s anything but supportive of Wisconsin’s great outdoors.

Walker already has cut current funding for the state’s bipartisan Knowles-Nelson Stewardship Fund, a public land acquisition and access program that reserves woodland, wetlands and shorelines for the public. His proposed biennial budget goes even farther, calling for the stewardship program to be suspended for 13 years.

The cut represents less than 0.5 percent of Wisconsin’s General Purpose Revenue expenditures — an amount smaller than the cost of a fishing license or state park sticker for every resident in the state.

“Nearly 9 in 10 Wisconsin voters believe that, even when the budget is tight, the state should continue to invest in protecting Wisconsin’s land, water and wildlife,” said Lori Weigel from Public Opinion Strategies, which conducted the survey on behalf of the conservancy. ”Most voters also said that one of the best things state government does is protect Wisconsin’s natural areas, outdoor recreation and history in state parks and other public lands.”

‘Taking the public out’

Given Walker’s policy inclinations, conservationists fear that suspending public land acquisition puts the state on a slippery slope that will lead to the sale of priceless wilderness and green spaces. The state’s park lovers interpret other items in the budget as a move toward privatization of the system, an approach that’s been tried — and has failed — in other states.

In his budget bill, Walker proposes cutting all general purpose tax funding of the park budgets, which currently amounts to $4.6 million. The governor apparently wants either to force the system to become self-supporting or to privatize its management, which would turn the parks and their concessions — gift shops, firewood sales, etc. — over to for-profit businesses, say critics of the cut.

“Self-sufficiency is a noble cause, but it cannot be accomplished in the present year,” wrote Bill Zager, president of the Friends of Wisconsin State Parks, in a letter to supporters. The proposed cut, he said, would prevent the parks from functioning at a level that users expect, even with the huge network of volunteers who have helped the parks survive prior budget cuts.

The parks once received 50 percent of their support from the state, but that amount has already declined to 21 percent, according to the Wisconsin League of Conservation Voters.

“The parks are owned by the state’s taxpayers. You can’t just say that you don’t want to take care of them,” Zager said. Members of FWSP groups already pitch in to help with the costs. The groups have raised $540,000 and provided nearly 187,000 volunteer hours to help maintain the parks.

Zager said his group is in favor of accepting corporate donations, which are already helping to pay for park improvements. “But there is not a mechanism in place to make (corporate donations) work for day-to-day operating costs at this time,” he pointed out in his letter.

Like other groups, his is opposed to selling naming rights of state lands to corporate sponsors.

To help make up for the loss of state funding, the proposed budget would increase fees for an annual state park pass from $25 to $28 and raise camping fees by $2 per night. Visitors would have to pay an additional fee of $9.70 just to make reservations. While that might not seem like much, it would deter poorer families from visiting the parks and reduce the amount of money that visitors spend at local businesses.

Handing the parks over to private management would raise fees further, since companies are structured to make profits.

“The park system is really there for the average Wisconsinite who doesn’t have the ability to buy lakefront property,” said Steve Hiniker, executive director of 1000 Friends of Wisconsin. “The parks provide an opportunity for the people to enjoy nature. Walker really is creating a state for the elite … where the rich have things and the rest of us don’t.”

Another controversial item in Walker’s budget calls for turning the Department of Natural Resources into an advisory board with no decision-making authority. That role would be shifted to Walker’s administration.

Conservationists are not happy about the proposal. Walker’s record has stirred intense anger among environmentalists. He eased the mine permitting process after Gogebic Taconite made a $700,000 donation to Wisconsin Club for Growth, which benefits state Republicans, and he’s suing President Barack Obama’s administration over new regulations limiting carbon dioxide emissions from new and existing power plants.

“There’s a lot of outrage,” Hiniker said. “Walker is taking the public out of the management of state resources. Wisconsin’s land management was always built on the idea that we’d have public input and a public voice to make sure that politics didn’t get in the way of managing the parks in the best interest of the environment. Management of our resources used to be beyond politics. Now we have a management style that allows all kinds of political issues to trump the people’s interests.”

An additional item in Walker’s budget that is causing anger calls for the elimination of 66 positions from the DNR — one-quarter of them held by scientists whose research and knowledge are essential to properly managing the state’s wildlife and natural resources, from bobcat populations to old growth forests.

Critics question whether Walker’s attack on the DNR — and its scientists in particular — is payback for the agency’s work on climate change, which state Republicans deny is occurring, as well as for the limits DNR officials have set on hunting and their opposition to mining operations that use caustic chemicals near sensitive wetlands and sources of drinking water.

In 2013, Walker signed the Koch brothers “no climate change action” pledge, according to Jim Rowen’s blog The Political Environment. When Walker appointed real estate developer Cathy Stepp to head the DNR, he openly crowed that she was tapped because he wanted someone with “a chamber of commerce mentality,” Rowen wrote.

Critics contend that Walker doesn’t want science getting in the way of profits for his cronies. Whatever the motivation, it’s impossible to detangle science from environmental management.

“Any real natural resources protection is based on sound science,” Amber Meyer Smith, director of programs and government relations for Clean Wisconsin, told the Milwaukee Journal Sentinel. “The more science you remove from the process, the more politics you add.”

Meyer Smith told the Journal Sentinel that the science cuts to the DNR and Walker’s proposed $300 million budget slash to the University of Wisconsin system share a troubling characteristic — hostility toward intellectual work.

Wisconsin League of Conservation Voters executive director Kerry Schumann holds out hope that Walker’s cuts to conservation and the park system can yet be avoided. She’s heard criticism of Walker’s plan from Republican and Democratic lawmakers alike. “People like (Assembly Speaker) Robin Voss are being very vocal in opposing this,” she said.

“Right now, even money that has already been approved and allocated for land purchases isn’t being spent,” Schumann said. “They’re being held up even though the money is there. First (Walker) cut funding to the stewardship program, then didn’t make the land purchases and now there’s a complete freeze. There’s this slippery slope that makes you wonder where it’s all headed.”

Hiniker is less optimistic that the governor can be persuaded to change his stance.

“For one month, 100,000 people were chanting outside the Capitol and it didn’t change a damn thing,” Hiniker said. “Walker has shown that he’s immune to protests.”

A majority of those surveyed said that protecting Wisconsin’s natural resources is important to a healthy economy, and the numbers agree. The stewardship program protects many of the natural resources on which Wisconsin’s $13 billion tourism industry, $22 billion forestry industry and $4 billion hunting and fishing industry depend, according to WLCV. Recreation also is high on the list of amenities that attract businesses to the state.

“When a family goes to a state park, they spend an average of $230 on the businesses around the park,” Schumann said. The revenue is dependable and steadily growing. Visits to state parks have risen 12 percent since 2002, even as funding for the parks has declined.

Wisconsin’s parks and green spaces are as essential to the state’s identity as beer and cheese. Indeed, the very name of Wisconsin’s land stewardship fund reflects the state’s deeply rooted bipartisan ties to conservation. Former Democratic Gov. Gaylord Nelson, the founder of Earth Day, and Republican Gov. Warren Knowles were its inspiration.

Wisconsin has produced several important conservationists. In addition to Nelson and Knowles, the list of Wisconsin conservationists includes the legendary John Muir, Aldo Leopold, Nina Leopold Bradley and Hilary “Sparky” Waukau, a member of the Menomonee Nation who helped save the northern part of Wisconsin from becoming a nuclear waste dump. Perhaps those historical figures helped to establish the outdoorsy culture that the Nature Conservancy’s survey found among state residents.

But the Walker budget rejects this tradition.

“When it comes to conservation, this budget is absolutely terrible,” Schumann said.