As we mentioned last time, bike traffic at and near the 700 and 800 blocks of State Street is unlikely to decrease anytime soon—in fact, given ongoing or upcoming improvements to Library Mall, the Memorial Union, and the new Alumni Park, bike counts are actually likely to increase substantially. While in the previous installment of this series we focused on the need to brand the space with creative and distinctive bike racks, we also argue that in order to handle a bigger bicycle presence, the city and the university will have to get serious about providing covered bike parking and valet services. These elements are essential to accomplishing one of the primary goals the consultants have identified: making the project area a true destination instead of a pass-through space. 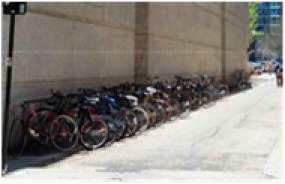 In its current configuration, the space is not designed for bike parking. Racks do not meet city requirements.are often full of abandoned bikes, and are very difficult to access. They are nearly always overfull, which makes them even more difficult to park a bike in. This situation needs to change.

One good way to better accommodate cyclists is to understand that riders access the space for different reasons. Some cyclists need to run into the library, the bookstore, or a State Street shop for only a few minutes. For these cyclists, convenience of parking is paramount.

Other cyclists will be parking their bikes at a space and staying for a longer period of time. These include campus or retail workers, students spending long study sessions at the library, or visitors attending a special event, concert, or rally. For these users, exposure to the elements and safety of their bikes over a long time period are more crucial concerns. While the city and university can and should install better bike racks in convenient places in the project area, longer-term, more secure bike parking deserves far more attention. While proximity to destination may still be an important factor in bike accessibility, these cyclists are more likely to walk a block or two from their bike to their destination if the parking meets these qualifications.

One way to do that is by creating or appropriating a covered space under which to park large numbers of bikes. A hotel in Portland, Oregon converted a portion of the ground floor of its parking garage to a large bike parking area, monitored by the garage attendant (below top). Additionally, bike rack manufacturers are creating innovative space-saving racks that make covered parking even more attractive to cyclists. Madison-based Saris Cycling Group, which manufactures bike storage, transport, and parking infrastructure, has created the Stack Rack (below bottom), which offers a spring-loaded lift assist to enable any able-bodied bicyclist to store their ride in an upper deck rack. 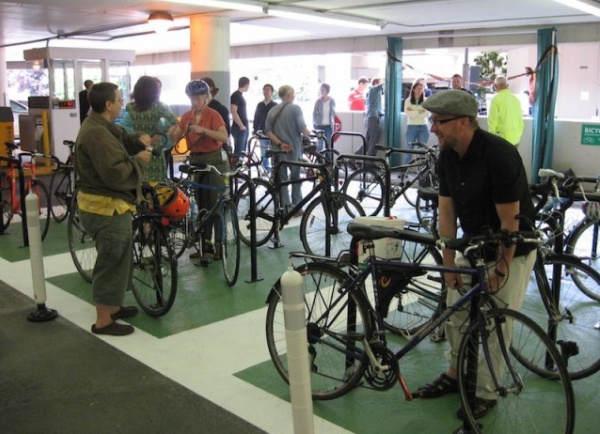 Fortunately for the City of Madison, several of its municipal parking ramps are close to lower State Street, and the University has ramps close by as well. Any of these would be quality locations for large-scale covered bike parking. We also recommend that the city consider sponsoring bike valet service for the State Street and Library Malls during larger gatherings. According to the Wisconsin Bike Fed, bike valets are a convenient and secure way to park very large numbers of bikes, especially at special events. Since the redesign attempts to increase the Mall’s draw as a destination space, adding a valet as an element of programming could help deal with large numbers of bicycles in ways that conventional bike parking simply cannot. Below, a bike valet service run by the Bike Fed for Madison’s Concerts on the Square is always packed.

Thinking a bit more broadly, the University of Wisconsin could consider running a full time bike valet service in one of its parking ramps close to State Street. This would serve both students and the broader UW community well, albeit at added cost. The Helen C. White ramp would be a great location for valet services as well as for covered bike parking.

If the university adopted a permanent bike valet, they would hardly be alone. At the University of Arizona in Tucson, the university’s parking and transit services recently opened an on-campus, all-day bicycle valet service for students and employees, and at Chicago’s Willis Tower, the management company offers a bike valet service for people working in the office tower. The service is located in the underground parking garage. Incorporating covered bike parking areas and bike valet services into the State Street 700-800 Block & Library Mall project will increase the space’s appeal as a destination and will facilitate a reasonable balance between bikes and pedestrian use of the space.