Stopping Climate Change Now On Us 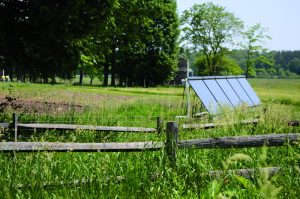 “Of all the questions which can come before this nation…there is none which compares in importance with the great central task of leaving this land even a better land for our descendants than it is for us, and training them into a better race to inhabit the land and pass it on.”  -Theodore Roosevelt

Last week, President Trump decided to pull the United States out of the Paris Climate Agreement. This is a short-sighted idea for many reasons, but it shouldn’t be seen as a death sentence for the U.S. or the planet. It does, however, mean there will be even more responsibility on individual corporations, communities, and citizens.

Stopping climate change won’t be easy. We must immediately invest in clean, renewable energies. Wisconsin generates less than 7% of its electricity from renewable sources and we still derive almost 2/3rds of our energy from coal. 1000 Friends works to empower communities across Wisconsin to curb carbon emissions by switching to renewable fuels and energy efficient alternatives. This improves communities’ economic and environmental sustainability. Towns and cities have historically led on both climate mitigation and adaptation practices, and we need to support these communities now more than ever.

To further cut emissions, we must modernize our antiquated transportation system. The transportation sector is responsible for approximately 1/3rd of carbon emissions; second only to electricity production. Wisconsin, like much of the U.S., is overly reliant on automobiles. This has led to expensive highway projects and unnecessary stress on both taxpayers and the environment. 1000 Friends advocates for increased mass transit funding, as well as pedestrian and bicycle infrastructure; all of which reduces the number of cars on our roads and our dependence on fossil fuels.

We must also enhance our efforts to protect our natural resources. Of late, both our federal and state governments have demonstrated an indifferent stance on environmental issues. 1000 Friends promotes sustainable land use practices and community planning, so more of our natural areas are protected. We also advocate for the protection of watersheds and farmlands, two integral resources in mitigating and adapting to climate change.

Stopping climate change will be a difficult task, but not an impossible one. By banding together, and making incremental changes in our energy and consumption habits, we can ensure a stable climate for our planet. Because, as Theodore Roosevelt said, we must leave this land “a better land for our descendants than it is for us.”