A large part of the $850 million state officials want to spend on widening Interstate 94 could instead go to many southeastern Wisconsin roads that are in urgent need of repair, according to a new study.

An analysis of Wisconsin Department of Transportation data by a pair of transportation advocacy groups finds that about 2,500 miles of local roads throughout the region are in a “failed, very poor, or poor” condition. The analysis, released Thursday, concludes that one in three southeastern Wisconsin roads are in urgent need of surface repairs.

The study was conducted by 1000 Friends of Wisconsin, an environmental advocacy group, and the Coalition for More Responsible Transportation, which comprises 20 local and statewide organizations calling for a more prudent use of taxpayer money on transportation projects. 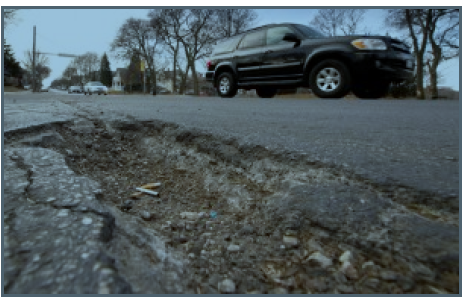 Traffic passes a pothole Thursday on Milwaukee’s east side. 1000 Friends of Wisconsin and the Coalition for More Responsible Transportation is calling for money that is being used for an I94 expansion to instead be used for local roads. (Staff photo by Kevin Harnack)

“Our local roads are in terrible shape,” said Steve Hiniker, executive director of 1000 Friends of Wisconsin. “And while people have a jarring experience getting to and from work, they shouldn’t get in touch with city hall. They should get in touch with people in the state Capitol — legislators who are withholding the appropriate funding — so that communities across the state can repair their local roads.”

The groups announced their findings Thursday morning alongside Peter Skopec, campaigns director for the Wisconsin Public Interest Research Group, another organization opposed to the I94 expansion.

“For the cost of the expansion of I94,” Skopec said, “we could meet the local road repair needs; fund transit, bicycle and pedestrian infrastructure; and pay for the rehabilitation of state owned
roads for the next ten years, combined.”

On Feb. 17, Mark Gottlieb, WisDOT secretary, announced an $850 million plan to repair and reconstruct I94 between 16th and 70th streets in Milwaukee. The transportation groups that gathered Thursday support the state’s plans to make repairs to that section — work that is estimated to cost between $350 million and $400 million. Their opposition is to WisDOT’s plan to use the remaining $450 to $500 million of the roughly $850 million project to expand the roadway by one lane in each direction.

The transportation groups’ news conference Thursday came a day ahead of the state Legislature’s budget committee’s scheduled visit to Alverno College, a Catholic university in southwest Milwaukee. Lawmakers plan to use the hearing to discuss a host of budgetary matters, including the I94 plans and other large state highway projects.

Last fall, the Wisconsin Taxpayer Alliance, a private research organization, released a study finding that money paid by the state to assist with local transportation projects had decreased by 8 percent in the past 15 years. Dale Knapp, the organization’s research director, said the decline has been made worse by rising construction costs and vehicles’ ever greater fuel efficiency, which results in lower collections of gas taxes.

“A few years ago, a state commission outlined possible solutions to the state funding problem,” Knapp said. “Moreover, the state transportation secretary offered some alternative funding mechanisms in his budget request. To this point, both have been ignored, leaving us to borrow more for our transportation needs.”

“We’re spending a half-a-billion dollars on a project in Milwaukee that we don’t even want,” said Milwaukee Alderman Nik Kovac. “The DOT — rather than borrowing more and jacking up debt service payments our children will have to pay for — ought to take a hard look at the rational amount to invest.”

Officials with WisDOT did not immediately comment Thursday afternoon.

-Matt Taub is the Milwaukee city beat reporter. He can be reached at matt.taub@dailyreporter.com or 414-225-1820.