The Ongoing Case of Highway 23

Gov. Evers’ state budget has allocated $116.6 million of the state’s inadequate transportation budget to expanding a two-lane section of Highway 23, which experiences relatively little congestion, to a four lane expressway. The project was authorized at a cost of $42 million in 1999, but the cost rose by over $100 million and continues to rise — to $156.5 million in August 2019. Just 7 months ago, in February 2019, the cost was estimated to be $153.5 million!  There are other, less expensive ways to address the desired improvements, but the administration has willfully ignored them.

Republicans fully funded Highway 23’s expansion in their version of the transportation budget as well. Unfortunately, this money is being diverted from significant, large-scale projects that have been halted mid-construction due to lack of funds.

The unnecessary Highway 23 expenditure also comes at the expense of underfunded local roadways that are in drastically poor condition.

Two courts have denied federal funding for the improvements sought on Highway 23 due to improbable future-use statistics and the failure to address environmental concerns. Although the courts ruled more recently that those objections have been addressed we contend that unacceptable flaws in the project still exist and that the funding is needed for other critical problems in the state’s transportation infrastructure. 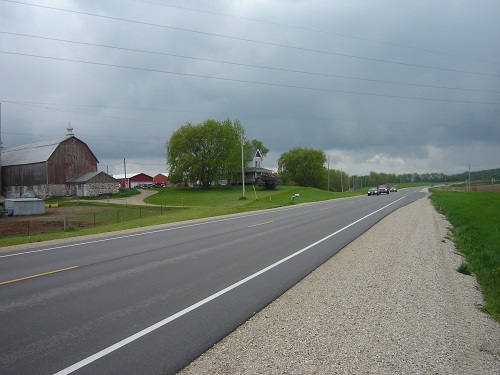 Wisconsin State Trunk Highway 23 connects Sheboygan with Fond du Lac.  Nearly half of the highway — from the western edge of Sheboygan to the west side of Plymouth — is a divided four-lane roadway. A 19-mile two-lane rural road continues west from Plymouth to the eastern edge of Fond du Lac.

The two-lane section of the highway experiences little congestion during the day, except for occasional backups caused by slow-moving farm machinery. Heavier slowdowns occur occasionally during commuting hours and special events; such as auto races at the Road America speedway near Plymouth.

Several serious collisions along the highway have included fatalities. But the roadway’s safety record is actually better than most similar highways in the state, according to the Wisconsin Department of Transportation (WisDOT).

For some time, a number of area residents have advocated for widening the two-lane portion of the road to four lanes. They’ve cited several accidents and perceived congestion as justification for the enlargement.

Advocates succeeded in convincing a bipartisan contingent of local state legislators to amend the state’s 1999 biennial budget to include funding for major improvements to the road (called “enumeration”) at a cost of $42 million. At the time, the money was authorized for unspecified improvements to reduce congestion and improve safety and was not allocated specifically for a four-lane divided highway.

State law calls for projects to be evaluated for enumeration by the state’s Transportation Projects Commission before enumeration. A proposed project cannot be evaluated by the Transportation Projects Commission without preliminary environmental studies and cost estimates, neither of which was provided for Highway 23. The move to enumerate Highway 23 in the state budget without prior review was unprecedented.

Still, the budget was authorized, and an environmental impact statement (EIS) process was begun. The EIS evaluates the direct and cumulative environmental impacts of a project, which policy makers must take under advisement before green-lighting construction. Additionally, EIS documentation is also required before a project can received federal cost sharing dollars.

Rules require that the EIS must be accurate and informed by public input. However, before the EIS was even completed, WisDOT decided that the road should be a four-lane divided highway. The agency reached this conclusion despite substantial evidence that constructing passing lanes would provide a far less costly approach to address safety and congestion.

The fact that Highway 23 was authorized prior to the development of an EIS calls into question the validity of the entire environmental impact assessment, and a court determined that WisDOT deliberately downplayed or ignored environmental impacts and potential cost issues so that it could obtain the federal funds needed to complete the project.

Need for the Project

Safety is the prime consideration for any highway improvement, and proponents point to accident statistics on Highway 23 to justify the need for widening it. But such expansions do not necessarily enhance safety. In fact, adding lanes increases traffic speed, which can result in more serious collisions.

On the other hand, the addition of passing lanes and the improvement of intersections and sight lines are less expensive and are equally — if not more — effective in many cases.

While constructing additional lanes may reduce congestion, the proposed project is an unnecessarily expensive way to accomplish this goal. Since the congestion is caused primarily by farm machinery and trucks, a more cost-efficient solution would be to build a “Super 2” highway that uses passing lanes to circumvent slow-moving traffic.

To justify the four-lane upgrade, WisDOT projected traffic increases that failed to take into account the dramatic decline in traffic growth since 2004. Americans no longer drive at increasing rates, and in many areas they drive much less. The failure to consider driving statistics undercut WisDOT’s projections and prompted a federal court to dismiss widening the project. In fact, at several count locations along the corridor, average daily traffic has decreased.

The process leading up to the four-lane project mandated the relocation of 17 farms and the loss of nearly 218 acres of productive cropland. It has also destroyed 51.8 acres of wetlands and displaced 30 residences and three businesses.

In 2011, 1000 Friends of Wisconsin sued WisDOT over the artificially low projected costs of constructing the four-lane divided highway. We also challenged WisDOT for failing to consider: the viability of alternatives to widening; the dubious traffic projections; and the limited public involvement during the EIS process.

In addition, there were other unanswered questions: Why was a study that showed passing lanes creating significant improvements at a lower-cost discarded?  Why did WisDOT acknowledge the lack of evidence showing that lane expansion would reduce the number of traffic fatalities?  Why did officials fail to acknowledge that increasing lanes might exacerbate accidents during icy conditions?

1000 Friends prevailed in this litigation. A federal District Court ordered WisDOT hold new public hearings and justify the methodology it used to calculate traffic projections. The project was halted until the EIS was completed and evaluated.

In 2018, WisDOT amended the EIS and held a new public hearing to justify its methodology. During that process, 1000 Friends was asked to respond to the new EIS. We contended that the revised EIS failed to address many of its concerns. We urged both the Federal Highway Administration and WisDOT to reject the “preferred alternative” and instead focus on the more cost-effective strategy of constructing passing lanes. Following revisions to the EIS, the court found that the project was developed according to accepted standards for the analysis of alternatives.

In light of 1000 Friend successful litigation, the Legislature asked the Legislative Audit Bureau (LAB) to audit WisDOT’s Highway Program, including its project planning. The continual shortage of funds at the department was hindering the State’s ability to complete highway projects already underway and to address the poor condition of local roads.

LAB found that, among other things, WisDOT consistently underestimated the cost of highway projects, failed to factor in the costs of inflation in its estimates, and violated administrative rules by failing to document the reasons for selecting certain projects over others. The failure to follow proper administrative procedures helped to explain why WisDOT was able to move Highway 23 forward despite other agency concerns, public comments against the project, and false traffic count projections.

On May 9, Gov. Evers held a press conference near his hometown of Plymouth to announce that 20 years after its unorthodox incorporation into the 1999 state budget, construction to expand Highway 23 into a four-lane divided highway would begin. Construction started prior to the passage of a highly contentious budget.

That decision is questionable on a number of fronts. According to Wisconsin Act 59 (2015-2017 Wisconsin state budget), $19,400,000 was to be reserved for construction work along State Highway 23. HOWEVER, the statute also mandated that if available funds were not used for construction by Jan. 1, 2019, those funds would become available for other projects.

It would seem that the intent of Act 59 would be to ensure that the governor consulted with the Legislature over the most pressing needs for the highway expenditures. Instead, the governor appropriated the funds for Highway 23, four months after the exclusive deadline for using the funds on Highway 23 had passed. Given the dire need across the state for the maintenance of existing below-standard roadways, this seems imprudent.

The decision to proceed with Highway 23’s expansion is one of the state’s worst transportation policy decisions in recent years. When construction on Highway 23 began in May, six other major state highway projects and two megaprojects in Southeast Wisconsin were already under construction but stalled due to a lack of funding. Those projects will need an estimated $1.524 billion to complete. The years-long stalemate over how to fund the backlog of construction projects is no closer to resolution than it was four years ago. The state has also identified a backlog of 1,955 bridges that need repair at a cost of $1.4 billion. The National Bridge Inventory classifies 1,043 of those bridges as structurally deficient. There’s also a major backlog for repairing local roads because the state has cut back on local funding due to revenue shortfalls.

All of these issues were known when the decision was made to go ahead with Highway 23’s expansion.  The LAB audit of the State Highway Program clearly laid out the deficiencies. Yet this administration decided to push forward knowing that funding to complete the project had not been secured. In addition, the administration ignored the warning signs of a funding crisis, the recent history of fiscal mismanagement, the unmet funding needs of projects already underway, and the needs throughout the state system for local roadways in serious disrepair.

Highway 23 must be immediately shut down until a funding solution is established to finish incomplete projects and to meet the state’s existing maintenance needs. To start an entirely new project without first addressing these existing needs is fiscal management at its worst.  Knowing there is a better, less expensive alternative makes this decision even more distressing.

As long as we continue to overspend on questionable highway projects, our communities will continue to be shortchanged. Many pressing issues have been ignored in favor of highway expansion, including local road maintenance and developing transportation alternatives like public transit, and non-motorized transportation that have attracted young people and new businesses to other states.

Over the past three decades, Wisconsin transportation policy has been dictated by the state’s road builders. As their lobbyists commanded the state to focus on elaborate, expensive and personally profitable projects, critical road maintenance and public transit needs were neglected. Meanwhile, the state spent its way into an alarming transportation budget deficit. Only strict discipline and an agenda that emphasizes widespread basic needs will bring our transportation spending back into balance.

With that in mind, it is irresponsible at this time to launch a major new highway project that affects a relatively small number of drivers without first prioritizing all of our transportation needs, while considering all of the alternatives. We can’t undertake expensive new projects such as widening Highway 23 when more cost-efficient alternatives are available.

Moving forward with a project that is essentially a gift to the road-building industry will force the state to continue overlooking basic transportation issues. Gov. Evers made a mistake in approving a project that is oversized, unnecessary and untimely. His decision to move forward on expanding Highway 23 will increase our transportation funding crisis. Even his predecessor called time out on major highway expansion until a long term plan could be developed.

Evers ran for governor on the promise to place the interests of the people above those of lobbyists for special interests. But now – he is taking a step backwards.  Gov. Evers – just say no to special interests!