As Wisconsin has become more auto-dependent, local ordinances have responded to accommodate vehicles.

Working under the surface, our regulations have helped mandate a land use pattern that is conducive to vehicles at the expense of all other forms of travel. Often overlooked, zoning codes and municipal ordinances like mandatory parking, minimum lot sizes, and street width requirements have shaped and now define the places we live.

This article will explore street width preferences, which have an outsized impact on our land use patterns.

Take a look out the window. Consider the width of the street. Does it need to be this wide? Does it include on-street parking that it is rarely used in an area where most homes have garages?

As auto-oriented development became the status quo, cities began to mandate wider roadway widths on local streets to better facilitate the movement of vehicles. All too often these width requirements are too large. “Street Design Guidelines for Healthy Neighborhoods” found that 18’ widths are best for residential streets without parking and 26’ widths are best to incorporate street parking.

Yet communities across Wisconsin are mandating much larger streets. For instance, the City of Chippewa Falls has stated its preferable widths are 30’ for residential streets without parking and 36’ for streets with parking. 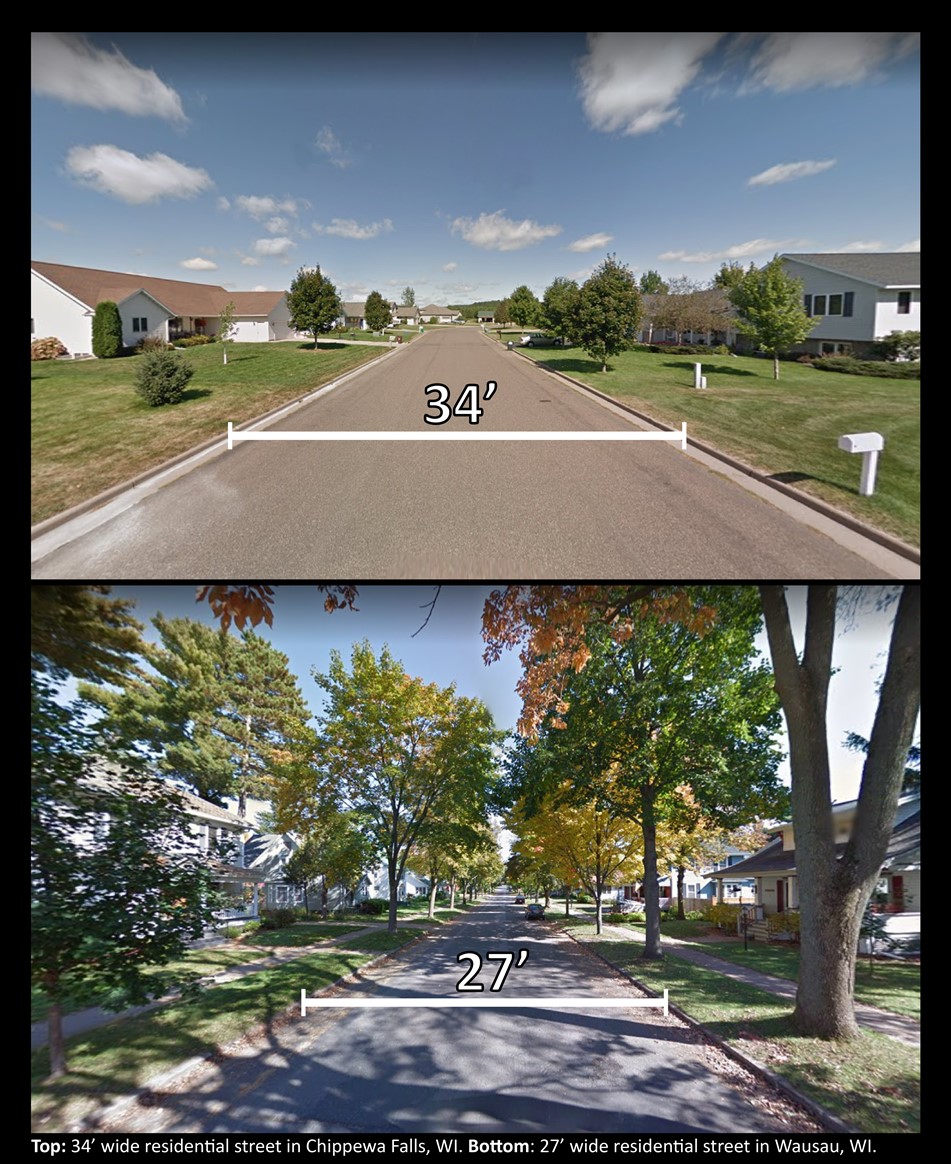 While it may seem minor, there are huge implications behind larger streets.

Wider roads are more dangerous as they allow people to drive faster. In fact, a 36’ road will experience four times as many crashes per year than a 24’ road. As people drive faster, it makes the road less appealing to other modes of transportation.

Excess roadway requirements can also make it more difficult to build sidewalks and bike lanes or to support street trees in the right-of-way.

If communities did reduce their preferred roadway widths it would make room for active transportation infrastructure, make our roadways safer, and make streets healthier by providing more room for streets trees.

1000 Friends encourages Wisconsin communities to reconsider their local regulations that may be inadvertently supporting suburban sprawl and auto-oriented neighborhoods. Roadway width preferences, like those in Chippewa Falls, can be found in communities across Wisconsin.

We support changes to local ordinances that support mixed-use development with compact, pedestrian-focused lot sizes. This can be challenging, if not impossible to achieve, with outdated regulations.

Check out part five, where we explore highways as a land use and learn a little more about the history of Milwaukee.

This is the fourth post in a series highlighting the relationship between land use and transportation – the Transportation Connection – below is a full list of articles in the series.

Part 1: The Connection between Transportation and Land Use

Part 5: Highways as Land Use