Green Downtown was a research initiative funded by Madison Gas & Electric that aimed to describe and analyze urban sustainability.

Green Downtown was a research initiative funded by Madison Gas & Electric that described and analyzed urban sustainability. The study captured the sustainability benefits that come from the uniqueness of downtown areas that accrue thanks to the density of people and ideas that make downtown areas unique. 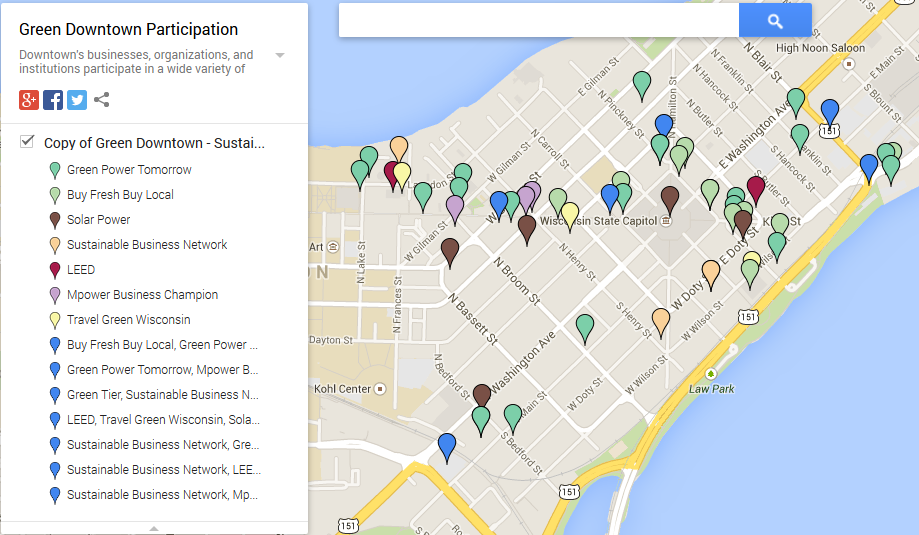 In 2013 we refined our research and worked to communicate an expanded vision of urban sustainability to the general public. Above, you can see the results of one such initiative, which mapped downtown businesses and organizations that participate in sustainability programs. We also produced a new series of analyses on walkability and the urban streetscape, with which we are exploring how urban areas can encourage more walking and biking.  View an interactive map of Green Downtown participants.

Through the walkability research done for the Green Downtown Report, we have identified a number of problem areas in public spaces around the downtown area that hinder its livability and walkability. In order to make downtown more sustainable as a business district and a neighborhood, we proposed a three-pronged approach to improving walkability: on-the-ground walking audits whose results are publicly available and became part of the city’s decision-making process, improved wayfinding and navigation for pedestrians, and a data-driven approach to infrastructure and programming that allowed communities to appropriately prioritize improvements to the public realm.

In our Downtown Survey, respondents chose “vibrant and walkable streets and sidewalks” as the number one visual indicator of a sustainable neighborhood, and our study of walk appeal in downtown revealed gaps in the walking environment that may hinder connectivity and act as barriers to more walkable streets. We have expanded our walk appeal analysis, including physical infrastructure, pedestrian traffic, crime, intersection density, and more.

1. 1000 Friends of Wisconsin partnered with Sustain Dane to offer a workshop for downtown businesses entitled, “Mythbusting Sustainability on State Street.” This event drew a crowd of 20 businesspeople, community members, and sustainability experts to talk about pragmatic solutions to the unique sustainability issues facing businesses in a dense urban area.

4. The research and communication breakthroughs realized through the Green Downtown initiative have given 1000 Friends of Wisconsin a seat at the table in shaping Downtown Madison.

According to the Project for Public Spaces, placemaking is “looking at, listening to, and asking questions of the people who live, work and play in a particular space, to discover their needs and aspirations.” So the goal is to create public spaces that serve the exact needs of the people who live close enough to use them.

Placemaking is what 1000 Friends of Wisconsin hopes to achieve through our work and it informed the research and communication of the Green Downtown program. 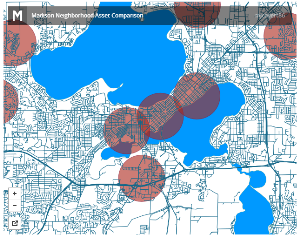 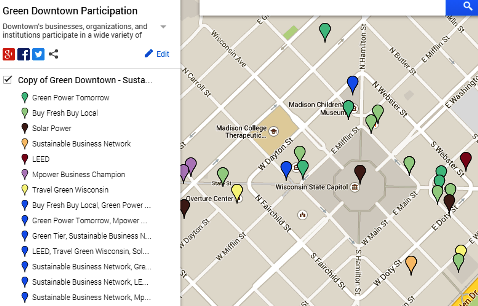