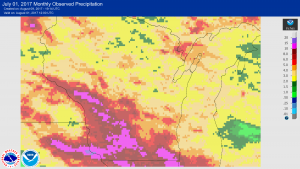 If you feel like we’ve had a lot of rain recently, you’re not wrong. Wisconsin typically sees around 3.5” to 4” of rain during a normal July. Those averages, mainly in southern Wisconsin, were crushed last month. Southern parts of the state saw 3 to 4 times their average amounts, with many locations registering over 10” of rain in just a few weeks.

Unfortunately, July hasn’t been our only rainy month. Wisconsin has been soaked for the entire first half of 2017. New data released just yesterday shows that the state has seen the wettest Jan-July period in history; our highest such period in 123 years of record-keeping! Sadly, this trend may become the norm in the years ahead.

Climate scientists have predicted more frequent, heavy rainstorms for decades now; both globally and here in Wisconsin. The fact that climate predictions have changed little in the past years, combined with the actual resulting storms, proves we could be headed down a dangerous path.

Flooding is the 2nd most deadly (behind only heat waves) severe weather event. Heavy rains and the resulting floods are dangerous and costly. Assessments from July 12’s flooding could reach $17.5 million in Racine County alone, and flooding has cost the U.S. over $110 billion since 1980. But flooding doesn’t only pose a physical risk to life and infrastructure; there are many non-immediate threats which are overlooked.

Big rainstorms, especially those in the spring, can lead to crop damage and food shortages. Flooding can create favorable mosquito environments, which can pose risks to public health. Heavy rains erode soils and cause runoffs, which, as we’ve witnessed multiple times this summer, can damage lakes and streams. And as we also saw with July’s flooding, heavy rain can create sewage overflows and contaminated water supplies.

These rain events are only going to become more frequent in the near future. We have an obligation not just to ourselves, but to future generations to mitigate carbon emissions and adapt our infrastructure. Delay will only cost us more time and money down the road. By acting now, we can reduce the risks associated with heavy rain and flooding and build a more sustainable future in the process.