Wisconsin’s Department of Transportation, has varying degrees of authority over different transportation modes – from roads, to public transit, airports and rail. However, most of the department’s revenues are sunk into the state highway system, as shown in the illustration below. 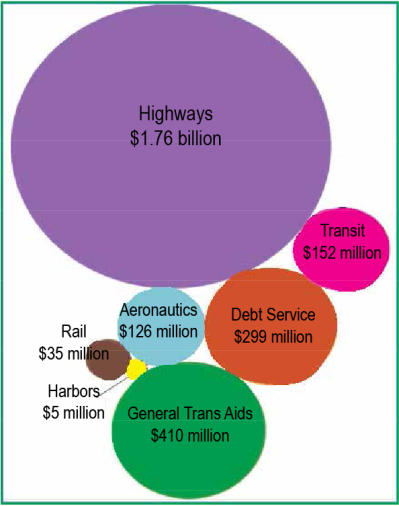 Years of over-investing in new highways, at the expense of other modes have left the state with hundreds of thousands of miles of crumbling roadway infrastructure.

Wisconsin’s pattern of spending on transportation has become increasingly unsustainable. The Governor appointed Commission on Transportation Finance and Policy predicted that the state transportation fund could face a shortfall of up to $17.1 billion over the next ten years.1

In spite of these tough financial circumstances, the Department of Transportation proceeded with a “business as usual” method of operation, with over half a billion dollars being allocated for new highway construction and reconstruction in 2013.2

Revenues from the state motor-fuel tax are at an all-time low. This is due to a combination of factors. First, more efficient cars are able to travel longer distances on a single tank of gas, causing less fuel to be sold each year, with consequent reductions into the state transportation fund. Next, we are also seeing several unprecedented changes in how Wisconsinites are choosing to travel. Vehicle miles driven in the state have been down consecutively for eight straight years.3 In light of this new data, it’s clear that we cannot maintain the status-quo of funding highways above all else.

It is time to envision, plan and design a new system of transportation that is more inclusive, and gives citizens transportation choice, instead of being restricted to driving a car.